The card is a custom, but the photo is real. On June 30th, the Rays and Tigers will throwback to 1979. 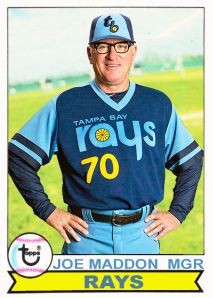 The original image was tweeted by the Rays on Wednesday.  The uniform is fun, but it is “inspired” by the late 1970’s Padres uniforms in the same way that Upper Deck Vintage was “inspired” by Topps – I’m sorry,  I meant O-Pee-Chee,  how silly of me – designs.  Check it out…

The cap logo isn’t all that dissimilar from the Brewers logo of the same vintage.

I expected the “fauxback” uniforms to be derivative, but this was a skosh more than I’d expected.  Even so, I’m glad the Rays are having fun with this.  I could so easily see myself as a Rays fan if I weren’t already a fan of the Mets and Orioles; the Rays stay competitive without buying mega free agents every year, they’ve got a great manager, likeable players, goofy promotions like this…  What’s not to like?

About the custom card:
I had already been working on a series of “Double throwback” customs – throwback uniforms on throwback cards – so when I saw the image of Joe Maddon, I said “Aw, HELL YEAH!!!”

This would technically be a custom 1979 Burger King card, because if I did a Joe Maddon 1979 Topps card, his photo would’ve been reduced to a little circle at the bottom of a team card, and what fun would that be?

Just for grins, I borrowed (and cloned to death) some background from the 1979 Len Randle card I used as source material, so Joe gets an authentic period tilted background. I point that out so that it gets the proper admiration it deserves.

The fonts used are Arial Black, which isn’t quite right but is close enough.  When all else fails, use Arial.

The blue in “Joe Maddon MGR”  is actually a lighter shade of blue than is used in “RAYS”;  I thought this would work out better than it did and reflect the colors in the fauxback, but it didn’t quite.  If I went back and did this over, I’d change the “Joe Maddon” color, but I’ve already spent way too much time on this one image.