A lot of my bigger “gets” from the show were vintage star cards which were somewhat lacking in… shall we say “Gradeability”?  No pristine pieces of cardboard entombed in the grading service shells of death, just well-loved cardboard which you know were handled, perused, examined, memorized and, in one case, somewhat abused. 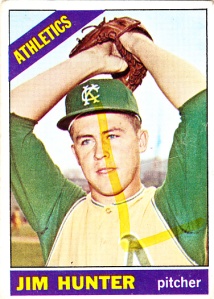 …Like this 1966 Jim Hunter, his second-year card.  It looks like someone made a big yellow highlighter “L” on the card (it looks worse in the scan than it does in person).  I saw this card in a box, it was obviously damaged, but how else are you going to get a 46-year-old card of a Hall Of Famer for $1?  It’s not even a card I would normally collect, but I had something of a “Charlie Brown Christmas” moment with this card… I looked at it, and I thought “I think it needs me”.

So, what else did I get?  Say hey, everybody!  Take a look at these! 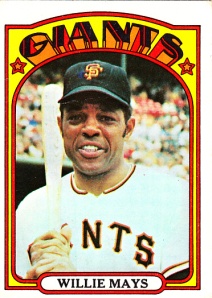 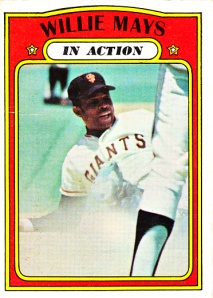 One of my somewhat last-minute goals of the show was to try to get some well-loved stars from the 1972 set, and Willie Mays certainly falls into that category.  If I also decide to go forward with completing the first two series of 1972 (something I’ve all but committed to doing), then I was going to need these two.  I would also need Mr. Joe Morgan…

…but Willie McCovey falls into the third series, so buying him is either a case of being proactive regarding possible future goals, or just me saying “WTF”. 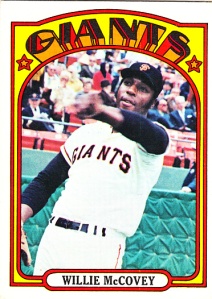 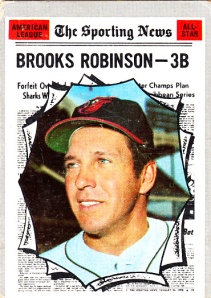 The total damage for these cards?  $16.  For less than the price of a blaster, I got 6 vintage cards featuring Hall-Of-Famers.  I ask you, how can you beat that?