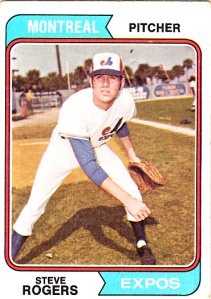 Steve Rogers had an impressive career;  so much so that you can’t help but wonder what his numbers would’ve been like had he been on a winning team before his 7th season.

Steve went 10-5, 1.54 in 1973 and finished second to Gary Matthews in the NL Rookie Of The Year voting.  He threw three shutouts that year, the first two coming in his second and third Major League starts…  and one of those was a one-hitter!  Steve was a five-time All-Star, two-time NL Shutout leader, and is the only player with a career longer than 5 years to have spent  his whole career with the Expos.

Next time, on an all-new “Without A Cup”:  A player who had his number retired