Many of you are aware that tonight is the series finale of The Office…. but instead of Dwight Schrute or Andy Bernard, I’ve got Dwight Bernard. 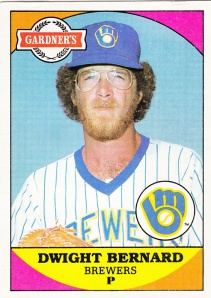 Before I get into The Office, I should say something about Dwight Bernard and this card. Dwight Bernard pitched out of the Mets bullpen in 1978 and 1979. After the 1979 season he was traded to Milwaukee, he pitched for the Brew Crew in 1981 and 1982, and got to pitch an inning in the 1982 World Series. He’s currently the pitching coach for the Mariners’ AAA team in Tacoma.

The card itself, which is about as oddball as oddball gets, is from the 1983 Gardner’s set, a regional issue from Topps. I believe that Gardner’s is a bakery in the Midwest; I’m sure someone can correct me if I’m wrong.

The front of the card is… um… colorful. The back is pretty much identical to 1983 Topps.

Getting back to The Office, I’ll definitely be watching tonight… possibly even something approximating real time so I don’t get spoiled. Will Steve Carell make an appearance? I don’t really care, but then again I never liked Michael Scott all that much… he doesn’t hold a candle to Ricky Gervais’ David Brent.  Brent was an idiot and completely misguided, but he was likeable at some level and you couldn’t help but hope that he’d see the error of his ways and be a decent person.  Michael Scott is more of an ass.  Dammit, he made Pam cry in the first episode!  Pam! America’s sweetheart! That bastard.

At any rate, I’ve always seen the show as being about Pam and Jim and Dwight…

…and Creed and Meredith and Angela and Stanley and Erin and Phyllis and so on. It took the show a while to find its footing after Carrell left, but I think that this season’s been pretty good and I’m looking forward to seeing if there are any twists left for them to twist.

So congrats to The Office… it was sometimes great, sometimes crap, but always kept me watching.

2 thoughts on “In Honor Of ‘The Office’, Here’s Dwight Bernard!”