I am so far behind in sharing my new acquisitions…

HOW FAR BEHIND ARE YOU?

…I’m so far behind that I’ve almost caught up to myself. Every time I go to a show or order off COMC I scan all the vintage cards and some of the more interesting post-vintage things, but for the most part the scans just build up because I never get around to writing about them.

This post is the first attempt to catch up, and all three cards are of Don Zimmer in his post-Dodger playing days.

Don Zimmer got around a bit in the early 1960’s. Shortly before the start of the 1960 season, the Dodgers traded Zimmer to the Cubs for a package of players and cash. He stayed with the Cubs for two seasons before being drafted by the Mets in the October, 1961 expansion draft.

There techically aren’t any Mets in the 1962 Post set – I guess because they used photos from 1961 and didn’t do any airbrushing – but if you look at the last line of text on this card, you can see there are cards which reference the fact that the featured player was drafted by the Mets. 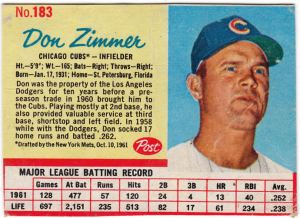 The Gil Hodges card (which I don’t have) has a similar line on it.

One of the Mets’ objectives in putting together that first team was to obtain players who would be familiar to the New York baseball fan, and Zimmer certainly fell into that category. Despite that, he only played 14 games for the Mets before he was (mercifully?) traded to the Reds.

Zimmer finished 1962 in Cincinnati, but during the following winter was traded to the Dodgers for a minor leaguer. 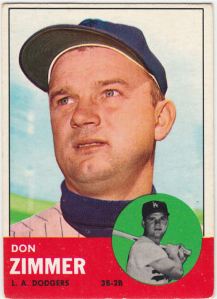 His second stint in LA was short, because he was sold to the Senators that June. He’d finish out his major league career with 2.5 seasons in D.C., after which he played one very unspectacular season in Japan. 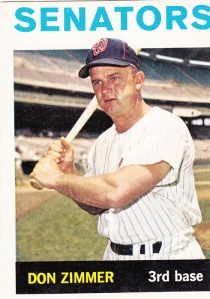