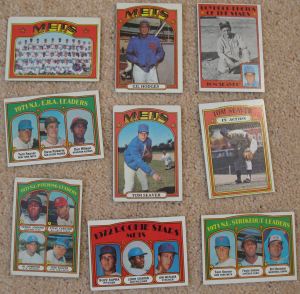 I got curious about how this compares to other teams,and I did some queries against my collection’s database —

Disclaimer time: The 1972 Topps data I use originally came from a software package that had several errors in it (i.e. Joe Torre with the Mets, Jim Fregosi “Traded” with the Angels), and while I corrected those errors, there’s always the chance that there are more that I missed.  Take these results with a grain of salt.

— it looks like the four largest team sets in 1972 are the Mets, the Pirates (46 cards), Orioles (40 cards) and A’s (40 cards). What I found in how the sets break down was interesting enough to make another post, which I’ll write as soon as I get a chance (ideally later this week).

Quick aside:  I’m sorry about the photos;  they’re not up to my usual standards – and WordPress insists on rotating two of them to make them Landscape instead of Portrait — but I incorrectly thought photos would be quicker than scanning the cards.  HAH!

I’m going to make a couple of guesses at why the Mets, a team that finished 3rd the year before and wasn’t excessively loaded with stars, ended up as the biggest team in the set… 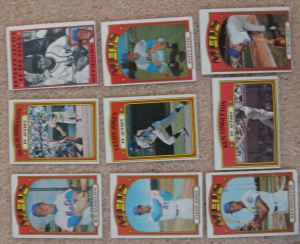 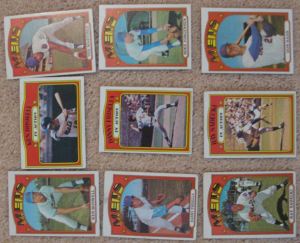 General popularity and lingering “Miracle Mets” goodwill:  Remember, 1972 is just a couple of years after 1969, and the Mets maintained the “warm & fuzzies” of their World Championship by staying reasonably competitive (3rd place and 83-79 in both 1970 and 1971).

Photographers Who Worked Out Of Shea Stadium:  Topps is based in New York and Shea Stadium had long been a hub of Topps photography.  How else can you explain Tim Foli and Ray Sadecki getting “In Action” cards while Frank Robinson doesn’t?

Quick tease for the follow-up post:  The Mets and another team have far more In Action cards than anybody else.  Hint:  It’s not a team based in NY or LA.

1972 Topps is such a big and innovative set that I had to be careful that I truly had all of the Mets cards. I ended up checking several different resources, including PSA team set registries, to make sure I didn’t miss any. I have to admit, there were several cards that I almost —

Oh. Uhhh…… sorry, lost my train of thought. Where was I? Oh, yeah, I was talking about how I had to be careful not to overlook the League Leader cards which feature Tom Seaver –

…Seaver… uuhhrrrr… which… feature…
Jeez, I’m sorry, I don’t know what’s wrong with me, I keep trying to finish a thought and I get these images flashing in front of my ey—

Whoa, there it goes again! It’s bizarre, it’s like there’s something on the edge of my consciousness, something I need to remember…

I forgot the CARD BACKS.

The “In Action” cards in the later series have backs which make up pieces of a puzzle, and “Puzzle D” features TOM SEAVER. That’s six cards I hadn’t taken into account. They don’t fit into the standard definition of a “team set”, but how can I include the League Leader cards and not count the puzzle pieces?

I’ve already got 2, but that means I still need the other 4.

…And one of them is Rod Carew.

OK, so to summarize:

> I’ve never listened to PSA before, why should I start now?

Sooooo…. I’ve got 4 new cards on my want list.  You’ll be hearing more about this soon.