So, it’s been about three weeks since Carlos Beltrán officially signed with the Yankees, even longer since it became known that he would be playing his home games in Yankee Stadium Mark III.

…and you know what? I’m still pretty pissed off about it.

This isn’t the usual “I’m tired of the Yankees throwing money around like rock salt on a frozen sidewalk” (to use a topical simile).

This one feels a little like betrayal… sure, “betrayal” is a little stronger than I actually mean, but I can’t think of anything better.

At this point, I’m thinking the best-case scenario from my own selfish standpoint would be season-ending injuries to Carlos and Brian Roberts (assuming his deal ever becomes official), thus sparing me the anguish of seeing two players I collect wearing the wrong-colored pinstripes.

So, what do you think?  Are there any maternal guilt trips I should’ve included in my little rant?

Oh, almost forgot… Just for grins, I created a 1/1 Magenta Printing Plate for this custom: 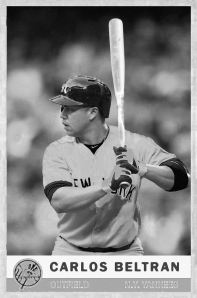 I’ll try to make sure the next custom card comes with less angst and guilt.

…And speaking of the next custom…

Would you like to see what a player will look like in his new uniform?  Make a request in the comments below, and I’ll do what I can to make one of my “Hot Stove” customs of your player! *

*Offer based on availability of images and abilities of the blogger.  No purchase necessary.  Void Where Prohibited.  Your results may vary.  Not to be taken internally.  If rash or swelling occurs, discontinue use.