I’d bet a stack of 1988 Donruss that this post gets its share of hits from people Googling on “Masahiro Tanaka Yankees”, so I’ll start off with a little explanation: This is a blog about baseball cards, and one of the things I like to do is make up “custom” baseball cards, ones that don’t exist in any format beyond digital… well, unless someone prints it out.

The card below uses a design based on the 1959 Bazooka baseball and football sets, and the image was “photoshopped” to get Tanaka into Yankees gear. 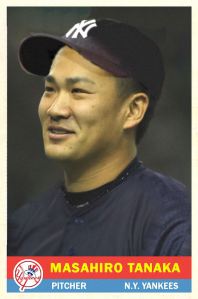 Although I’m not too thrilled that Tanaka signed with the Yankees (and I would have been just as un-thrilled had he signed with the Dodgers), I am nevertheless happy that he signed with SOMEONE, because now the dozen or so teams who didn’t get an ace pitcher, who didn’t spend $100M, can get on with the business of working on their respective Plan B’s (“Plans B”?).

As they might say on TV, “We now return you to your regularly-scheduled offseason, already in progress”.

As for the custom, I guess it turned out well enough, but it wasn’t quite what I had in mind. In an effort to be topical, I tried to get it done in one sitting, something that isn’t my usual M.O. It also got to the point where any attempts I made to improve it had the opposite effect, so I decided that it was, for all intents and purposes, done.

Here’s a helpful hint to my fellow amateur pixel-pushers…  The jersey in the photo started out as a Japan jersey from last year’s World Baseball Classic, and that jersey had red and yellow piping coming out the wazoo.  To make it look more like a Yankees BP jersey I removed all the colored piping by using the “scratch remover” tool.  This tool also works quite nicely on unwanted pinstripes.  I usually run over the modified area with a Soften Brush just to make sure it’s not overly obvious that something’s been removed.

So as of right now, next week’s Hot Stove card looks to be Dan Haren, since that’s what I was working on when the whole Tanaka thing came up.  If there’s somebody else you’d rather see on a custom card, leave a comment and I’ll see if my meager skills are up to the challenge.