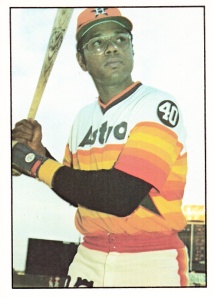 Bob Watson… might be best known today as an MLB executive, or maybe as the GM of the Astros and Yankees, but Watson had a 19-year career highlighted by two All-Star appearances and a .295 career batting average.

He is in second place among all-time Astros in batting average, and we have to extend the decimal to illustrate how close it is between Watson, Jeff Bagwell and Lance Berkman;  Bagwell’s Astro average is .2968, Watson’s is .2965 and Berkman is .2964.

Bob Watson is credited with having scored the millionth run in MLB history;  on May 4th, 1975 he scored from second on a Milt May home run, beating Dave Concepcion to the honor by a very narrow margin.

Betcha didn’t know… Bob Watson was the first player to hit for the cycle in both leagues;  he did it on 6/24/77 in the Astrodome against the Giants, and again on 9/15/79 in Baltimore with the Red Sox. 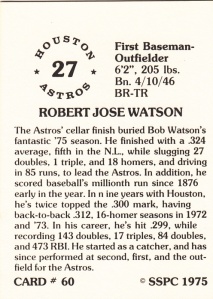