Over on The Five Tool Collector, a commenter recently lamented the lack of hockey card blogs out there.

I’m not about to start a blog devoted to hockey, but I’ve got a number of hockey posts I’ve been meaning to do… And being the public-service-oriented guy that I am, I figured I should get one of those posts out there.

Although baseball has always been the main focus of my collecting activities, I used to collect hockey back in the 1970’s and 1980’s, and to a lesser degree in the 1990’s.  I’d lost interest for a number of years, but lately I’ve been getting back into filling out some of my older sets.

One of the surprises I had when getting back into hockey was a discovery about O-Pee-Chee hockey.  I’d known for a long time that the OPC hockey sets were bigger than their Topps counterparts, but I never really thought about the implications of that not-insignificant bit of information.  For instance, I kinda sorta knew that 1977/78 Topps has 264 cards and OPC has 396 cards, but it only recently dawned on me that this meant that OPC has 132 cards that I’d never seen before.  More Capitals (my favorite team back in the day)!  More rookies!  More hockey players!

From comparing the O-Pee-Chee and Topps checklists, it looks like there are at least two cards in the “lower 264” that differ between the two sets.  Double garsh!

A couple of months ago, I began my assault on 1977/78 OPC with these four cards…

Gord Lane played for the Capitals and Islanders, and won four Stanley Cups with the Isles. 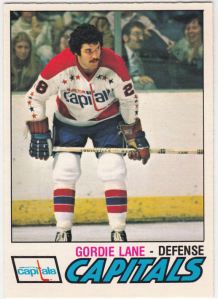 Ron Lalonde appeared in 397 NHL games, mostly with the Capitals.

Incidentally, I grew up on Long Island and didn’t have a natural connection to the Caps. This is one of those cases where my love for underdogs and an innate desire to march to a different drum coalesced into a situation that brought me a lot of pain for a number of years. The Capitals teams of the 1970’s were pretty darn bad.

This next card is notable if only because it shows the Caps’ road uniforms. During the 1970’s, Topps & O-Pee-Chee relied heavily on a photographer based out of Washington’s Cap Center, so most hockey cards feature the Caps in their home attire (and in “cameo appearances” on other player’s cards, a subject for another day). 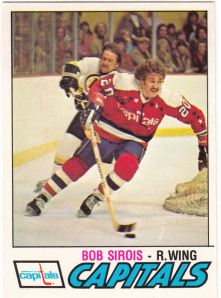 Bob Sirois played for the Caps for the better part of 5 seasons, and played in the 1977/78 All-Star Game.

This last card features a Hockey Hall-Of-Famer, but that’s an honor he earned off the ice…

Craig Patrick’s achievements came as the Assistant Coach and Assistant GM of the 1980 US “Miracle On Ice” hockey team, and as the GM of the Rangers and Penguins. Stanley Cups, and all that. He’s also a Patrick, a name that carries a considerable amount of weight in hockey circles.

I suppose I should mention that I’m not currently a Capitals fan… Despite the Caps’ making it to the 1998 Stanley Cup finals (and getting swept by the Red Wings), the Nineties were a rough decade for me as a hockey fan and I drifted away from the Caps and the NHL in general.  Over the past couple of years, I’ve drifted back towards hockey, but I’m quite content to collect older hockey cards and watch college hockey.