He was one of the best-hitting pitchers of the time;  he won three Silver Slugger awards, has a .238 career batting average and had 3 seasons where he batted over .300.

Rhoden has won over 50 celebrity golf tournaments, and has three career top 10 finishes in the PGA Champions tour.

In 1976, Rick Rhoden… had a breakout season as a starting pitcher, going 12-3 with a 2.98 ERA and making the All-Star team.  This came during a season where the Dodgers won 92 games and finished 10 games behind the Reds.

This card is… a fine example of the long-lost art of the fake follow-through.

Picking nits: “Albuquerque” is misspelled on the back of the card.

Cardboard History: His rookie card came the previous year, on a “Rookie Pitchers” card he shared with Scott McGregor and two others.

SSPC vs. Topps: Rhoden’s 1976 Topps card has a similar pose, but Rhoden’s attempt to look bad-ass on the Topps card ends up looking more like he has agita. 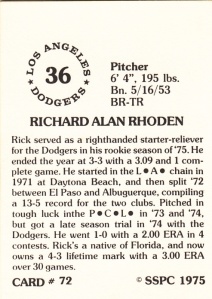