The subject line might sound like the name of some 1960’s band whose single “Groove In The Sun With Me” reached #38 on the American Top 40, but it actually describes a couple of purchases I recently made at a card show…

I’ve got all of the Pilots cards from the 1969 and 1970 Topps sets, and a few oddballs. There aren’t a whole lot of affordable oddballs left on my wantlist, but until recently this 1970 Kellogg’s Don Mincher was one of them. 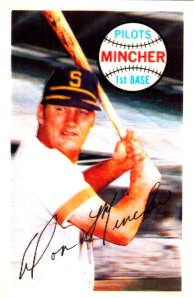 One of the great joys in life… well, in my life, anyway… is a Pilots card which shows the player in a regular season Pilots uniform. Not airbrushed, not the bare-bones spring training uniforms, I’m talking full-blown “scrambled eggs on the cap’s bill and stripes on the sleeves” Pilots uniforms like we have here.

Throw in the fact that it’s a 3D Kellogg’s card, and it’s well worth the $2 I spent on it.

Don Mincher was the first pick the Pilots made in the 1969 expansion draft, was the team’s lone All-Star representative, and hit 25 homers and got 78 RBI.  Not surprisingly he’s relatively well-represented in terms of Pilot cardboard.

It was just one of those dumb luck situations, but I also bought a handful of relatively cheap 1965 Topps cards, and Don Mincher was one of them. 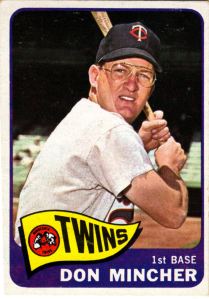 Mincher lead the league in IBB’s during 1965, which is interesting considering that the guys who finished behind him have names like Powell, Killebrew and Oliva.. I guess the fact that 3 of the top 4 guys were Twins says a lot about that 102-win, pennant winning team. 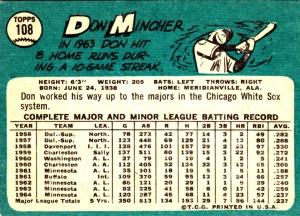 Mincher would be the GM and later a part-owner of the Huntsville Stars, and would serve as the Southern League president from 2000 to 2011. Even though I’ve never been to Huntsville and have absolutely no connection with that city, I’m a little sad that the Stars will be moving to Biloxi after this season. I guess I always feel bad whenever a city loses their baseball team, no matter what level of play is involved.

Before I get too carried away with Huntsville and Mincher, I haven’t forgotten that the subject line promised Pilots… PLURAL… So here’s a 2004 Fleer Greats Jim Bouton card I got off of COMC back at the end of 2013. 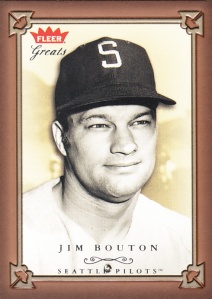 It’s not a vintage Pilots card, but it’s a Pilot all the same… and to many people, especially “Ball Four” fans, Jim Bouton is THE Pilot.

4 thoughts on “Don Mincher And The Pilots”