We continue our trip through the 1989/90 Topps Senior Professional Baseball Association (SPBA) set with more players with a Mets connection.  If you missed Part 1, you can see it here.

I’m going to keep going through this team by team, starting with the…

St. Lucie Legends
At the time, the facility at St. Lucie was still new, and if you’re going to have a team in the Mets new Spring Training home, it makes sense to load it up with former Mets.

The black pinstripes and a name like “Legends” made it sound like they were trying to appeal to fans of another New York team… Then again, they did have former Yankees like Bobby Bonds, Graig Nettles, Oscar Gamble and Walt Williams, so they were probably working both sides of the street.

Félix Millán played for the Mets from 1973 to 1977, was a fan favorite, and was the starting second baseman most of that time. 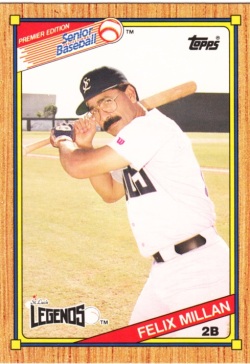 Jerry Grote was also popular with Mets fans. I would go so far as to say that, for Mets fans of a certain age, he is THE Mets catcher, despite what Piazza fans would say. 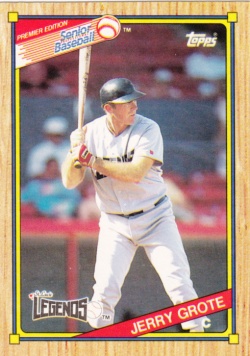 Grote was with the team from 1966 to 1977, and was the starting catcher most of that time, including in the 1969 and 1973 World Series. He twice represented the Mets at the All-Star game.

George Foster was the Mets “big named signed past his prime” for the early 1980’s. With the Reds he was the 1977 MVP, a five-time All-Star and lead the league in homers and RBI multiple times. 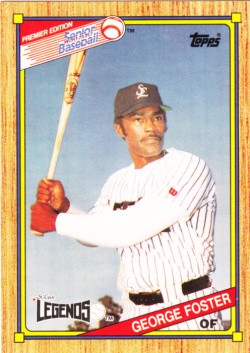 With the Mets, he was a starter for a few years and finished in the top 10 in homers and RBI a couple of times… but picking up the big name when he’s 33 and on the decline is the quintessential Mets transaction.

Everybody knows Clint Hurdle as the Pirates manager, or maybe as a former Royals 1st round pick and “can’t miss” prospect whose career was derailed by injury. He also had two stints with the Mets that added up to just 59 games. 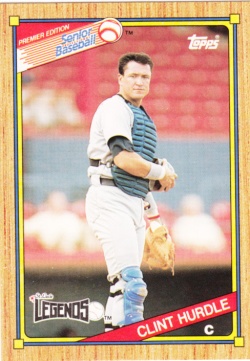 Jerry Manuel played a handful of games over 5 major league seasons, but would later manage the Mets for a couple of years. He was the Mets manager before Terry Collins. 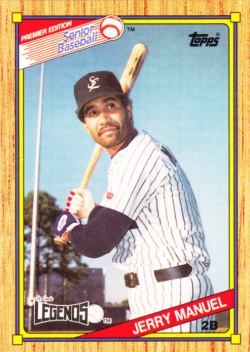 Several years after the fact, I’m still not sure how I feel about Manuel’s tenure as the Mets manager. 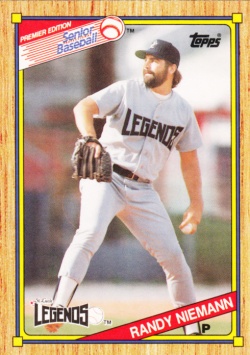 Niemann was the bullpen coach for the Mets a few years ago.

..and that covers the Mets-y guys on the Legends, let’s move on to the…

To quote Spinal Tap, there’s a fine line between clever and stupid, and “Orlando Juice” walks that line.  Of course, the name “Juice” would never fly in today’s world of performance-enhancing drugs. 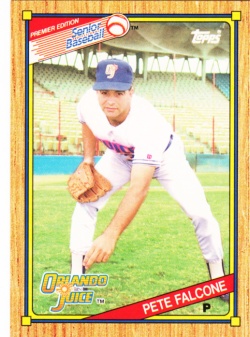 Something I either didn’t know, or knew but forgot:  Pete Falcone is the second-cousin to former Dodger and long-time Mets coach Joe Pignatano.  Pignatano was known for maintaining a tomato garden in the Shea Stadium bullpen. 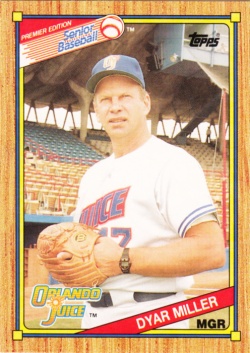 Jerry Martin finished his career with the Mets in 1984, but he only got into 51 games. 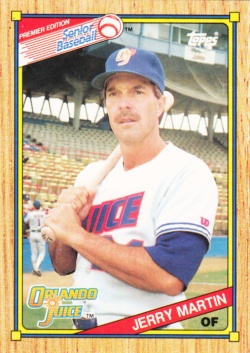 Jerry Martin’s father, Barney, pitched for the Reds and has an interesting claim to fame:  The first and last batter Barney Martin faced in his career was Stan Musial.  Unfortunately, this happened within one Major League game against the Cardinals in 1953.  Barney got Musial out both times, but gave up three hits, a walk and two runs in between to start and finish his MLB career.

I’m writing an awful lot about guys who aren’t on these cards, aren’t I?

Tom Paciorek played 18 years in the Majors, but only half of a season with the Mets.

The Mets traded for him in July, 1985 and released him after the end of the season.

Bradenton Explorers
Rick Peterson’s Mets days were in front of him… He would be the Mets’ pitching coach, as well as the pitching coach for the A’s and Brewers. He’s currently the Director of Pitching Development for the Orioles. 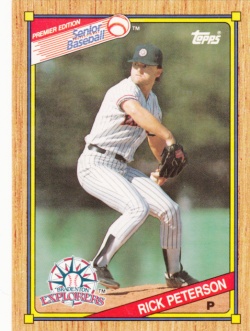 Rick Peterson appeared on damn few baseball cards, and this may be the only one that features him as a pitcher rather than a coach.