The previous post, like this one, involve “parallel” custom cards featuring Elvis Andrus placed in a variety of locations and situations.  The original idea came from 1967ers at Diamond Cuts And Wax Stains, and after the first post I got a bunch of great suggestions on where to take Elvis Andrus next.    You can call it “crowdsourcing”, or you can say I’m like one of those comic strips that are largely written by the readers and feature little boxes that say “Thanks to D.W. Washburn, Plano TX!”

…And before I get started, I didn’t use every suggestion, but that was more because I couldn’t get them to look the way they did in my head.  As it was, a couple of these required some work, including removing a guy named “Barry” from the background of one.

The first one features Elvis Andrus at an Elvis Presley concert.  This one was suggested by Nick – and since the link on his comment didn’t work, I’m assuming this is Nick over at Dime Boxes. 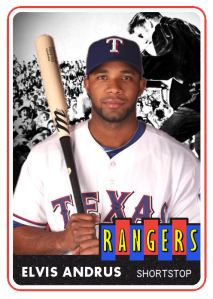 Elvis Andrus is so “Old School” that he’ll only be seen in a 1950’s Elvis Presley concert.

Incidentally, if you’re wondering why I’m picking on Elvis Andrus, it’s just because it happened to work out that way.  Right place, right time.

Jeff at 2×3 Heroes got all topical on me and suggested that Elvis Andrus might’ve been waiting in line for an iPhone 6: 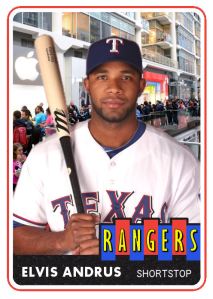 CommishBob at The Five Tool Collector had some terrific suggestions, and I unfortunately chose the one that involved the most work out of any of these (remember my comment about digitally removing the guy named “Barry”?) 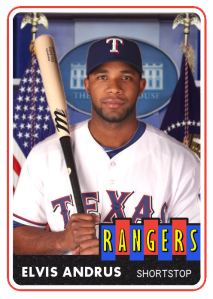 “My fellow Americans… Dios mio!  What am I saying, I’m Venezuelan!”

Finally, 2×3 Jeff had another suggestion which was too hard for this Mystery Science Theater 3000 fan to ignore.  He’d suggested that I make a custom of — 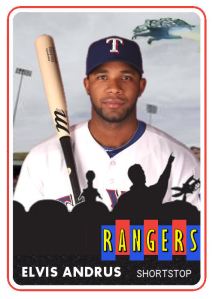 At the risk of beating a dead horse, I’m going to do one more post in this series… I’ve still got a couple of ideas I haven’t had a chance to implement, I’m still trying to work out some of the prior suggestions to my satisfaction, and I wouldn’t be surprised if some of you have some more great ideas.  Lay ’em on me!

5 thoughts on “Elvis Is Everywhere!”