A week or so ago I shared my Top 10 2014 Topps cards;  Today I’m going to share the cards that weren’t what I’d consider “Top 10”, but were interesting for other reasons.

I like this shot because it could represent a lot of things, ranging from “Aw, hell YEAH!” to “Are you freakin’ kidding me?” to “Oh, my toe bone!” 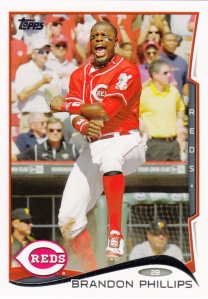 The more the Braves throw back to these Atlanta Crackers uniforms, the more I’m digging them.  Somebody in the majors needs to get some drop shadows going!

I have a major problem with this card.  It’s a cool shot, but there are at least 10 Phillies in this photo, there are 7 faces visible, and Freddy Galvis’ face ain’t one of them. 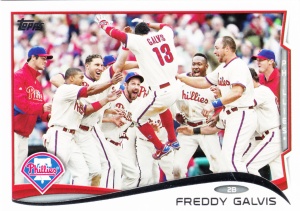 Put it this way;  if the FBI issued a wanted poster for Freddy Galvis, and they used this picture, then Freddy would still be at large.  “Sorry, sir, we simply haven’t seen any guys wearing “Galvis 13″ on their back.”

A cool action shot that fell just outside the Top 10.

I like this photo, but I also like Mark DeRosa, so I’m a little biased.  Back when having pitchers throw footballs was a thing – wasn’t it Tom House, pitching coach of the Rangers who started that?  Anyway, back when that was a thing, you’d see cards like this at least a couple of times a year.  Now it’s been a while since a football has shown up on a baseball card. 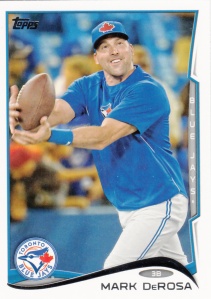 …And this is where you all leave comments along the lines of “Hey, ya big dummy, what about these other 200 cards involving footballs which came out over the past year?”

I know this is photoshopped and all, but could they have found a worse picture of Prince Fielder?  The man looks like he’s auditioning for the role of “Mr. Stay-Puft” in the Ghostbusters reboot. 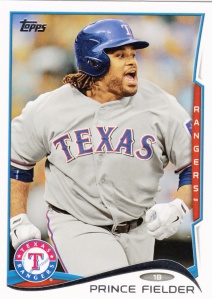 Finley-era Athletics throwbacks!  This photo would’ve been awesome on a 1969 design. 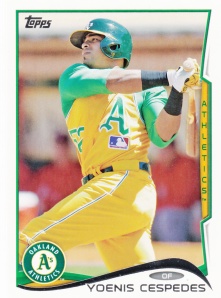 Apparently Yunel Escobar likes to do a lot of pointing at cameras. 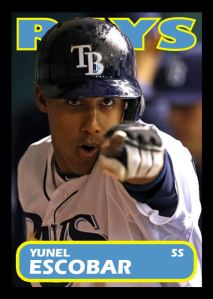 …but I was there first, so I’m going to feel smug about that.

2 thoughts on “Other 2014 Topps Cards I Found Interesting”