A friend of mine swears he saw “Super Aaron And Red Man Lemon” open for Parliament Funkadelic when they played Madison Square Garden in the 1970’s and they were AWESOME!

OK, fine, I made that up.  Within the context of this post, “Super Aaron” and “Red Man Lemon” refer to two beautiful, oversized cards I recently picked up from COMC.

“Super Aaron” is my 1970 Topps Super Hank Aaron (or “A-A-Ron”, as Key & Peele now have me thinking). One thing I’ve noticed about COMC is that their scanners highlight every flaw on a card… which is a good thing, since you want to be able to see those flaws… but I’ve found that it often makes a non-mint card look worse than it is. 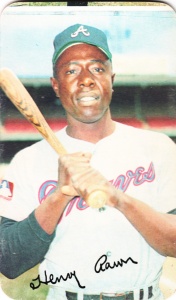 This card is obviously miscut, but it looks a lot worse in scans than it does in person. In person, it’s still a nice card that I’m very happy to add to my collection.

Like the football Supers, the back is generally the same as the regular 1970 Hank Aaron, but with a different card number.

Here’s “Red Man Lemon”… more specifically, a 1953 Red Man Bob Lemon.  Whenever I’m doing a shopping spree on COMC, I always look to see if there’s anything relatively inexpensive in the Red Man section, and this was the acquisition this time around.  Any Red Man cards in my price range is missing the redemption tab at the bottom, but ask me if I care.

I grew up thinking of Bob Lemon as a manager with the Yankees, White Sox and Royals, but he’s far better known as a Hall-Of-Fame pitcher. What I hadn’t known is that he started out as a position player… In fact, he was the centerfielder for one of Bob Feller’s no-hitters. Lemon lost time to World War II, and that combined with his start as an infielder meant that his pitching career was fairly short for a HOFer.  However,  he had an impressive run from 1947 to 1956. During that 10 year period he went 197-111, struck out 1,185 batters, threw 31 shutouts, pitched complete games in more than half of his starts, was a 7-time All-Star, a 7-time 20-game winner and no-hit the Tigers in 1948.

Here’s the back of the card, which is all about the promotion that Red Man was running. 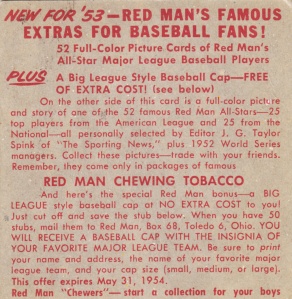