It’s become fairly commonplace for someone getting interviewed during a postgame show to get a face full of pie. Like it or not, it’s part of the game these days, and I have no problem with cards that reflect things like this…

…as long as it’s an insert or a variation, a category into which this 2013 Opening Day insert certainly falls.

Having pie on a player’s regular card, even if it’s “just” an update card… 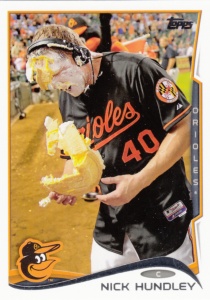 …I’m going to file that under “not cool”.

That’s not the issue it used to be, but I still think that a baseball card should depict a player, or something the player is known to do or has accomplished… not something that was done to the player. That just seems wrong.

Now that Nick Hundley has moved on to the Rockies, are we going to end up with the only “Nick Hundley on the Orioles” card being one where he’s got a face full of pie? Regardless of whether there’s any demand for a card picturing Nick Hundley with the Orioles, it still doesn’t seem right.

So what do you think?  Should a baseball card always show the subject’s face, batting stance, pitching motion or something else specific to that player?  Would you sign this card if you were Nick Hundley?

If you don’t want to weigh in on that subject, here’s are some alternate discussion topics:

4 thoughts on “What Would You Say To Some Pie?”