Several months back I bought a box full of cards which had apparently spent the last 20 years gathering a lovely musty smell in someone’s basement… or basements, because the labeling on the box made it clear that the previous owner had moved at least once.

I’m still working through some of those cards, and I recently came across something interesting from 7-Eleven.

…or even Slurpee cups.  This isn’t a set sponsored by 7-Eleven, it’s a set featuring the convenience store chain.

I’ll go ahead and throw all the images at you, then I’ll be back with some comments, musings and the like.

“I was feeling good! I even dropped a sand dollar in the box for Jerry’s Squids…. for the halibut.” 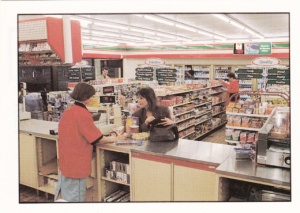 All of these cards have identical backs which tout the benefits of working for the 7-Eleven team. 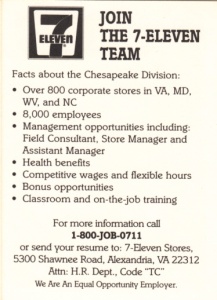 When I first ran across these cards, a classically-trained British actor in my head proclaimed “What a perfectly odd little set!”  (The accent is important in conveying the bemusement I felt.)

And I use the term “set” loosely, because I have no clue whether this is a full set. The facts are few, the conjecture could fill a room.

These cards came from a box that contained mid-1990’s cards, which would seem to indicate that these cards are also from the mid-1990’s… but that’s a pretty weak evidence.

I have these four distinct, unnumbered cards. That doesn’t mean there aren’t more. They were found together within a box filled with numerous junk wax sets and inserts, and there were no duplicates. That would seem to indicate (that phrase again) that the cards came to the owner all at once.

But as to how the cards were distributed, I can only guess. Were they inserts within packs? Were they given out with card purchases? Sitting on the counter? Free if you provided a SASE?  Available individually or as a set?

Enough of my conjecture. Has anybody seen these before?  I’m pretty curious about these (as if you couldn’t tell).

8 thoughts on “An Odd Little Set Of 7-Eleven Cards”