I originally intended for “Blah Blah Blah Blah” to be a placeholder for a real subject line, but then decided I liked it as well as anything else I could come up with.

This is another virtual pack of virtual baseball cards… Possibly one of the last packs of 2015 TSR Series 3 that we’ll bust… but time will tell. 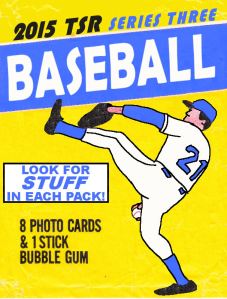 Darin Ruf figured into a “Well, doesn’t that just figure” moment I had last week. 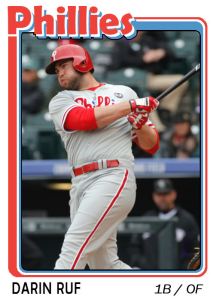 I recently took advantage of a deal from MLB.TV and got streaming video of the rest of the season for $25. Not long after, we started to experience internet issues at home, and even just uploading images to this blog became an ordeal. Streaming was out of the question.

We got our internet issues sorted out, and last Tuesday I was at home in front of the TV with some free time (finally!), and I said to myself, “I’m going to see what the Mets are doing!”

So I pulled up the Mets and the Phillies, and during the very first half-inning I watched on MLB.TV, the Phillies scored 5 runs, capped off by a 3-run homer from Darin Ruf.

It doesn’t matter how well or how poorly things are going, there’s always going to be “It freakin’ figures” moments when you’re dealing with the Mets.

Now, on to a new insert set. Back in the 1990’s I followed NASCAR and collected several of the sets that were out at the time. One of the things I liked about the NASCAR sets was that they gave a card to *everybody*… drivers, crew chiefs, team owners, jack men, gas men, even Miss Winston (back then the top circuit was sponsored by Winston).

I’ve often thought that baseball announcers should get the same treatment, and so with one particular ESPN announcer getting a fair share of attention lately, I figured now is as good a time as any to introduce this subset… 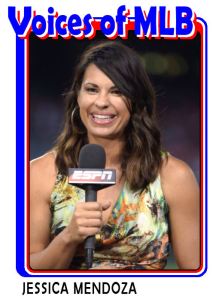 Jessica Mendoza has gotten a lot of positive press over the job she’s done working as an analyst for ESPN up in the booth with Dan Shulman and John Kruk. I went back and watched some of her first broadcast (I’ve got MLB.TV, remember?) and she did seem very good. She had some interesting insights into the game, and was a lot better than certain other analysts I’ve had the displeasure of listening to.

I’m not 100% thrilled with the “Voices Of MLB” heading on the card, but it was the best I could come up with. I’m open to suggestions.

This next card is here for three reasons: 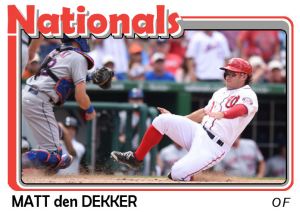 1) I told myself that we needed more horizontal cards in this set
2) I like Matt den Dekker (who’s a former Met)
3) There’s a Mets cameo… That’s catcher Kevin Plawecki on the left.

Unfortunately, den Dekker scored on this play and the Nationals won this game (July 22nd, for those who are curious).

There’s still plenty of games left so I’m not going to make any bold statements about the N.L. East…  However I will say that the Nats seem to be doing a wonderful job of mismanaging their bullpen.

Kyle Schwarber went from the Futures Game to hitting the ball out of Wrigley within just a matter of weeks. Talk about fulfilling one’s promise. 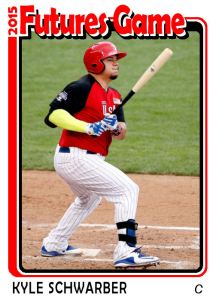 I really wanted to see a card paying tribute to Mike Hessman’s career minor league home run record, and since I can’t count on Topps or Panini to do this…well, if you want something done right, you’ve got to do it yourself. 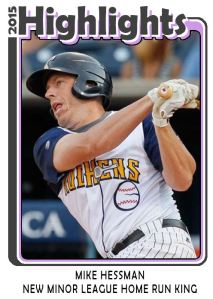 I gave some consideration to making this card be the same design as the 1974 Hank Aaron “All-Time Home Run King” card, but I decided it was more work than it would be worth… yes, even I have my limits.

Speaking of putting work into a card, I put just enough work into this card that I wanted to make sure that I posted it. 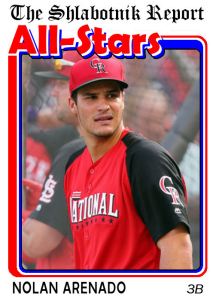 If you’re wondering where the work is, I reduced the contrast on the background to make Arenado stand out from other similarly-clad gentlemen. This one was definitely more work than it was worth, but here it is and you should oooh and aaaah over the results.

This card of Nori Aoki didn’t involve any extra effort on my part, I just like the way it turned out, and the end of the season is close enough that I want to make sure that some of these customs make it into a virtual pack. 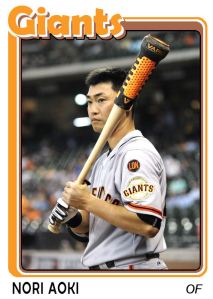 …But you have to promise me you won’t tell anyone that this is card #44 and should’ve really appeared in a Series One pack (he said, as if any of this made a shred of difference).