Me, I can’t go mainstream on anything.  I grew up playing this: 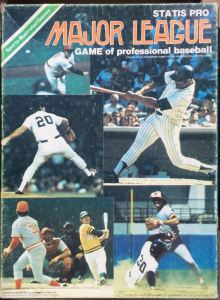 …The full title being the unwieldy “Statis Pro Major League Game Of Professional Baseball”, which everybody shortens to “Statis Pro”.

Here’s a view of the gameboard set up (more or less) for gameplay. 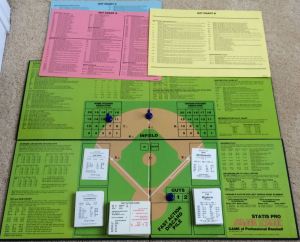 Don’t be intimidated by all of the charts… The game is intended to be a detailed simulation of Major League baseball, going as far as having rainouts, injuries and ejections, but gameplay can easily be simplified if you’re just looking to have a bit of tabletop fun.

I was 13 when I got my copy (with cards simulating the 1978 season).  The reason I got this particular game was because at the time I was fascinated by the war simulation games put out by a company called Avalon Hill.  I loved strategy games like Risk and Stratego, and Avalon Hill was a big time provider of games for the serious tabletop gamer.  Even the packaging was serious;  they called them “Bookshelf Games” and they came in a box that would stand upright on a shelf, for you to proudly display next to your copies of Gray’s Anatomy and the complete works of Ernest Hemingway.

Here’s the side and back of the Statis Pro box. 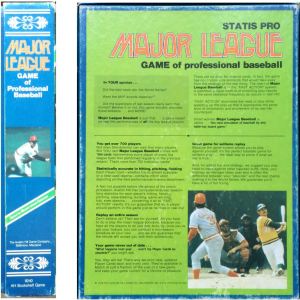 I turned out to be wrong about the war simulations being appealing to me, but from many hours of poring over the Avalon Hill catalog, I became intrigued by Avalon Hill’s sports games.

Besides, Statis Pro made me a promise that Strat & APBA couldn’t make:  the game came with instructions and formulas for making your own player cards.

“Make your own player cards”?!?

Oh, the mind reeled.  I could create cards for any player, for any team, from any point in history!  I could create a card for myself, and I could play against Major Leaguers!  How exciting!

The process of creating the cards turned out to be more labor-intensive than I’d realized, especially given that I got the game a good 12 years before I owned my first computer.  However, the ability to create cards has had one interesting and long-lasting side effect – even though Statis-Pro has officially been gone for over 20 years, it still has a following and people still generate card sets that they sell on eBay or make available for downloading.

Just for fun, I did make a couple of player cards, but I’ll come back to that after I give you a rough idea of how the game works.

Like most games of this sort, there’s a sort of “random number generator” aspect behind it… but rather than using dice, there’s a deck of “Fast Action Cards” with numbers on them. 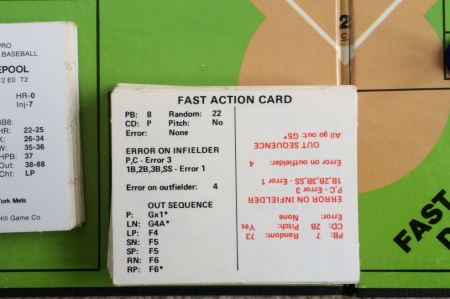 These cards generally simulate the roll of two dice through the “PB” factor in the upper left.  What makes it different from using dice is that there are cards that have other “PB” factors, and those can lead to errors, clutch batting or clutch defense, along with the odd occurrences I’d mentioned before.

One of the more interesting features of the game is that each pitcher has a rating that corresponds to the “PB” number on the Fast Action Cards.  If the starting pitcher’s rating is equal to or higher than the random number, the result of the at bat comes off of that pitcher’s card;  Otherwise we work off the batter’s card.  So, for example, Dwight Gooden from 1989 has a PB rating of 2-7. 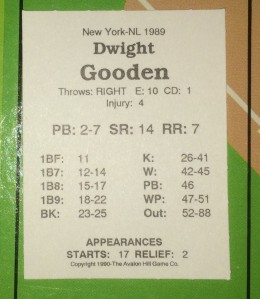 If the number off the Fast Action Card runs from 2 to 7, it means we’re working off of Doc’s card (which, of course, has a better chance of being an out).  Better pitchers might have a rating of 2-8 or 2-9, worse pitchers would have 2-6, 2-5 or less. 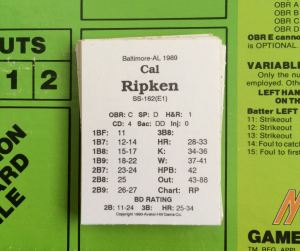 So, for example, if we were working off of Gooden’s player card and the Fast Action Card had a random number of 33, it would be a strikeout;  but, if the 33 were against Cal Ripken’s card, it would be a homer.

That’s the basic structure of the game, but there are other factors involved.
Pitchers also have another rating that basically determines how long they stick around, and it differs based on whether they’re used as a starter or a reliever.  That way, Mariano Rivera cannot start a game and be lights-out for 9 innings.  Certain events (hits, walks, errors, runs) eat away at the effectiveness rating, and when it gets to zero, the pitcher’s “done” and every result then goes off of the batter’s card until you put another pitcher in.

Gameplay can be as complex or simple as you want to make it.  There are a whole bunch of charts that can be consulted in different situations, but you can ignore them if you want to assume, for example, that all runners advance one base on a single, two bases on a double, and so on.

There’s one last twist in the game…  The “Z” Code.  Some of the cards which determine “pitcher vs. hitter” have a Z code which refers you to the “Unusual play” chart.  More often than not, nothing comes of it and you continue with game play, but the Z code is what leads to players getting injured or ejected, games getting rained out, and so on.

Just for fun, I used the formulas provided by the game to create two player cards… One for Mike Trout, arguably the best position player in the Majors, and one for “Joe Shlabotnik”, which was an attempt to make a utility infielder who would be the worst player in the Majors (but one who still managed to get in over 100 games). 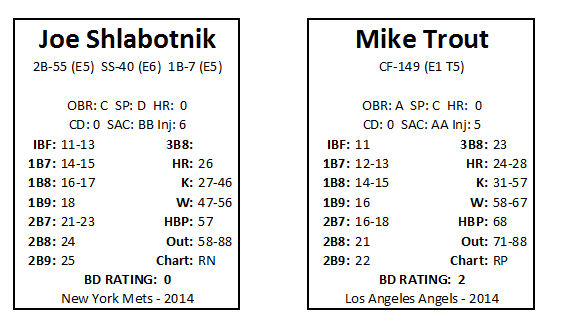 …So that’s the basics regarding Statis Pro. The game has a cult-like following, and if you want evidence of this, check out the “Statis Pro 1984” blog, where the entire 1984 season for every team is being played, and the author has been going at it since 2012.

26 thoughts on “A Quick Overview of Statis Pro, My Favorite Baseball Simulation”