I was performing some husbandly errands during my lunch hour yesterday, and when said errands had been completed, I found myself near a Target store. Naturally, I decided to see if I would be able to reward myself with some 2016 Heritage.

Lo and behold, they had some… So I bought a blaster. 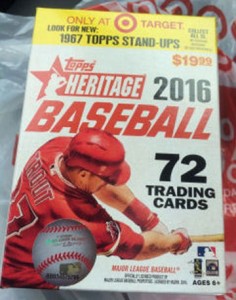 I ran out to my car and opened five of the eight packs.

Amazingly enough, with me at the time was a coupon worth $3 off a Heritage “value box”… This coupon came out of a booklet inside the 2016 Topps blaster I bought in January, and I rarely remember to use the things.

Here’s one of the packs from inside the blaster… 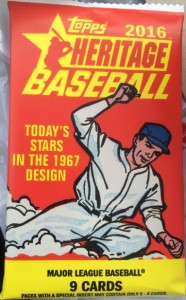 …And my first sight on opening the pack. 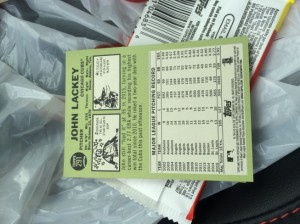 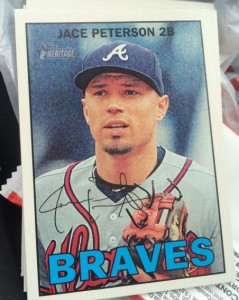 I’ll also point out the barely-perceptible TM mark just to the right of the “S” in Braves.  Thank you, Topps and MLB. 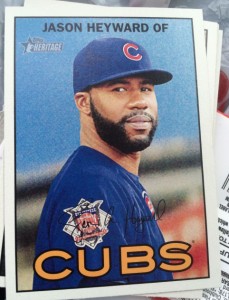 This next card made me think of something, let’s see if anybody gets the reference… 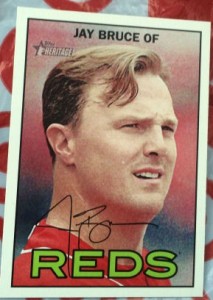 Another photoshopped card, this one of former Phils closer Ken Giles.  I share this because I wasn’t impressed by the photoshopping. 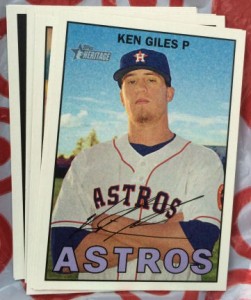 Later in this post I’m going to do a comparison of the Heritage against the original cards, but I’ll point out that the originals generally had the position spelled out when there was room, at least in the first series… In later series the position was often abbreviated but there was also a dot between the name and position.  Ideally, this card should either say “KEN GILES PITCHER” or “KEN GILES • P” rather than “KEN GILES P”.

Here are two card backs which had the same cartoons. 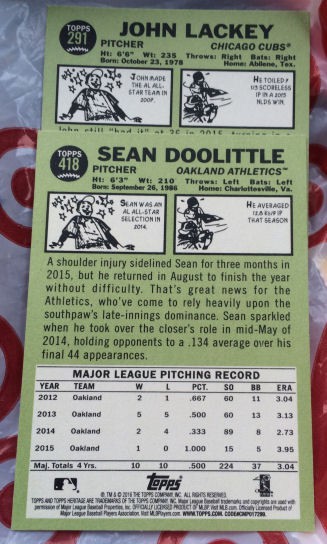 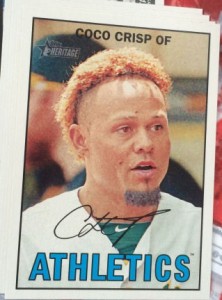 Seriously, though… this is a scary-looking card. 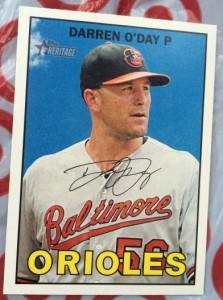 I’d share a “First Met” except I haven’t pulled one yet. 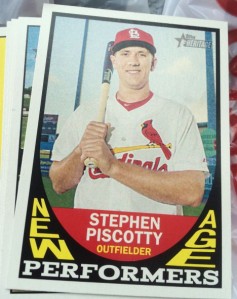 This design is a little reminiscent of 1967 Topps Football;  I’m guessing that’s not an accident.

Speaking of inserts, when I saw that one of the inserts was a Target-exclusive “Stand-Up” set, I got a little excited because I was thinking of these… 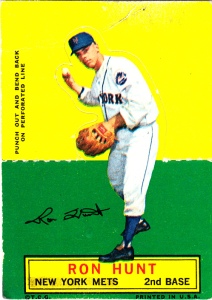 ..Forgetting that this Ron Hunt Stand-Up is from *1964*.  The stand-ups from 1967 are far less visually appealing, and the 2016 inserts are just as unappealing: 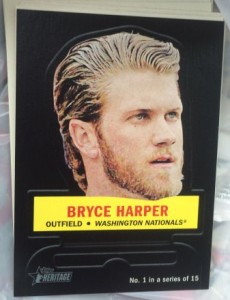 I don’t like these inserts, so they’re probably going to end up on COMC (if they’re worth selling there, anyway).

And from what I can tell, there’s no attempt to duplicate the 1967 Topps Venezuelan “Retirado” subset. Pity. Looks like I’ll just have to do a custom version.

One other thing I want to point out… According to The Cardboard Connection you can no longer distinguish the variations by looking at the Product Code on the back… That means that we all have to be aware of what the variations are, which is a minor pain in the butt.  I’m not too happy about that, especially since I would like for Topps to make it *clearer* when you’ve pulled a variation, not harder.

To wrap things up, I figured I’d do a side-by-side comparison of 1967 and 2016 Heritage.  Since I’ve teased the back of John Lackey’s card twice in this post, I’m comparing his card to a 1967 Felix Mantilla.

A word of warning:  I’m gonna get nit-picky here…

So here are the fronts… The original has a slightly larger photo area, which doesn’t make sense when you think about it because 21st century technology should allow them to have narrower white borders, if anything.  You can also see that the player name is in a noticeably smaller font on the Heritage cards. 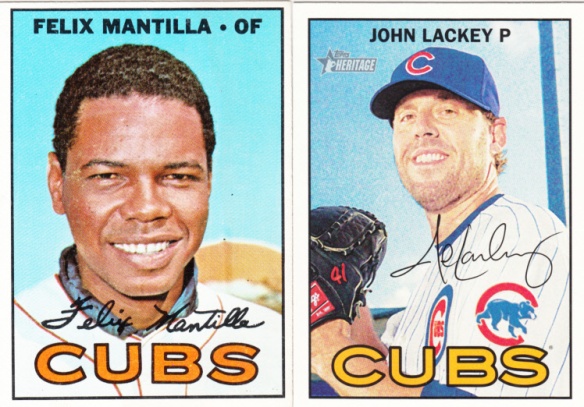 When looking at them side-by-side, you can see the team font and color is slightly different, but it’s not a difference worth getting indignant over.

My scanner doesn’t always scan true colors, so I’ll point out that the green on the back of the Heritage card is more of a “pea soup” green than it looks like here. 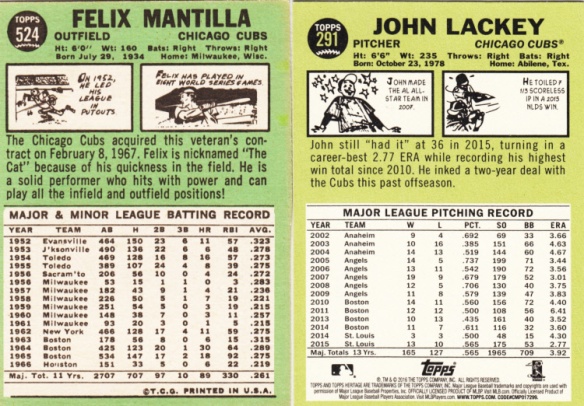 My only complaint, and it’s a minor kvetch, is that the Heritage card number is green instead of white.  I have an issue with it mainly because it’s harder to read.

Overall, I’m happy with the set.  There are a few things I wish they’d done differently, but it’s a lot nicer than the flagship set and I will be busting a fair amount of Heritage this year.

Now if we can only get Topps to create an additional “old school” set with an original design rather than one that pays homage to a past Topps design.

…And while I’m at it, I’ll wish for the ability to fly, for Yoenis Cespedes to give me his Alfa Romeo, and a Presidential candidate who I can vote for without holding my nose.