I have a few hobbies outside of card collecting, and one that has been with me since I was 10 or so is collecting and listening to records.  My collection isn’t anywhere as large as it once was, and I don’t go quite as crazy buying as I used to, but I still enjoy looking at used LP’s, especially when they’re cheap.  It’s not unlike going through a dime box.

The other night two of my hobbies intersected when I was in a local record store.  I was  poking through the cheap used vinyl when I ran across something that I couldn’t pass up for a dollar… 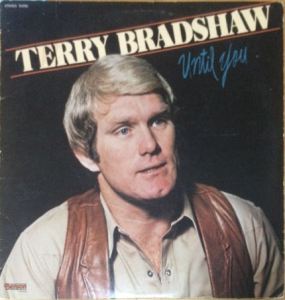 This is a copy of “Until You” by Terry Bradshaw, who was busy moonlighting as the Pittsburgh Steelers’ quarterback around the time this album came out. I’d heard that Bradshaw had put out some Country music, but I’d never heard anything of his.

…But even if the music turned out to be awful, or just something I didn’t care for, here was an album by a Hall of Fame quarterback… and a buck, no less. At the very least I had a really large football card for my collection.

After I got home I did some research and found that this was Bradshaw’s second LP and it had come out in 1980.  His first album, “I’m So Lonesome I Could Die”,came out in 1976 and the title track made it up to #17 on the Billboard Country Music charts. Who knew? Well, I’m sure plenty of you knew, but I didn’t.  Hell, I grew up near New York City, where “Hee Haw” didn’t even get shown in prime time… Not only did I not know much Country music growing up,  I didn’t even know anyone who listened to it.

Here’s the back of the cover, including (of course) pictures of him with the Steelers, as well as one with his wife. 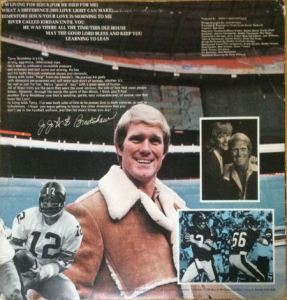 As you can see, there’s a note on the back, from the lovely Mrs. Bradshaw herself. This might be a little hard to read (especially if you’re on a phone), so I’ve included a transcription below the photo. 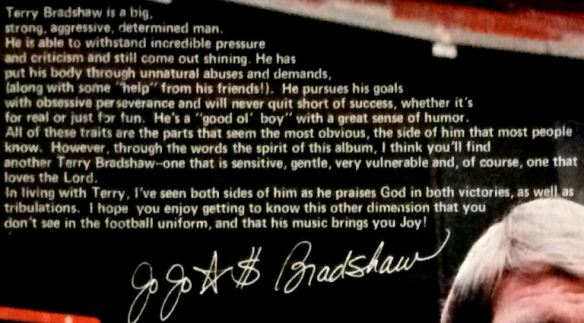 Terry is a big, strong, aggressive, determined man.  He is able to withstand incredible pressure and criticism and still come out shining.  He has put his body through unnatural abuses and demands, (along with some “help” from his friends!).  He pursues his goals with obsessive perseverance and will never quit short of success, whether it’s for real or just for fun.  He’s a “good ol’ boy” with a great sense of humor.  All of these traits are the parts that seem the most obvious, the side of him that most people know.  However, through the words the spirit of this album, I think you’ll find another Terry Bradshaw – one that is sensitive, gentle, very vulnerable and, of course, one that loves the Lord.
In living with Terry, I’ve seen both sides of him as he praises God in both victories, as well as tribulations.  I hope you enjoy getting to know this other dimension that you don’t see in the football uniform, and that his music brings you Joy!
— JoJo (star) $ Bradshaw

Terry’s wife’s signature made me wonder for a while… Why does she have a pentagram and a dollar sign in her signature? After I looked her up, I realized why – His wife at the time was figure skater JoJo Starbuck (hence the two symbols in her signature… Star Buck. Get it?)

Despite her praise for Terry, she would file for divorce the same year this album came out.

Just to prove that I didn’t buy an empty cardboard sleeve, here’s the label of the album… 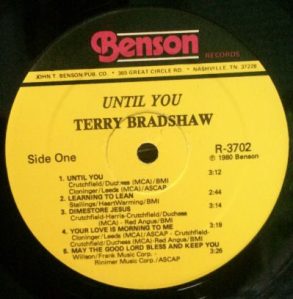 Bradshaw has released a few more albums, although not with any consistency in the timeframe… Perhaps just when his muse dictates.

I haven’t had a chance to listen to this yet;  is anybody familiar with Terry Bradshaw’s  musical career and can give me a heads-up of what’s in store for me?