The World Baseball Classic is rolling around again next March, and while I’m not a huge fan, I do enjoy the opportunity to watch competitive baseball early in the year.  I’ve been thinking that it would be fun to devote a small set of customs to it, and to leave the design of the set open to nominations followed by an online vote.

Last week I shared the first prototype, based on a nominated design… But I have to admit that this week’s is self-nominated.  I was organizing cards the other night, looked at my binder of 1980 Topps and said “Hmmm… That would work…”

When I was looking for a photo to use, I went through photos from the recent WBC qualifier round in Brooklyn, and once I saw this picture of Cody Decker from a post-game celebration, I knew which picture I had to use… 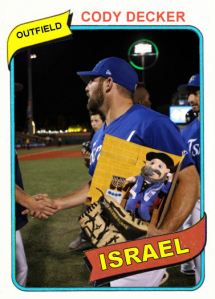 For those of you who are currently saying “Huh?”…

I’m not Jewish, but having grown up in a middle-class suburb of New York City I have an appreciation of Jewish-American culture and I love the Israel baseball team having a Mensch On A Bench as the unofficial mascot.

Apologies to Cody Decker, this is more a picture of the Mensch than of Cody… but I’ll do what I can to get him a better custom card when my WBC set goes live.

Getting back the the whole prototype thing…  On the surface, 1980 Topps is a little more mainstream than I had originally been thinking, but it does have potential, so it will be part of the voting that will take place……. sometime…….. before March.

If there’s a vintage, semi-vintage or not-really-vintage-at-all card design you’d like to nominate for this custom WBC set, leave a comment.  Three suggestions:

1 – Oddball sets are most definitely welcome.

2 – It doesn’t have to be a baseball design, so long as it works as a baseball set (i.e. no goalposts, hockey sticks or basketballs incorporated into the design).

3 – I’m shying away from anything that has team logos, mainly because I’m not sure what I would substitute for those.

I’m currently working on a 1986 Topps prototype, and welcome any other suggestions!

3 thoughts on “WBC Prototype #2:  I Really Like Who Israel Has Coming Off The Bench”