I’ll admit that, coming down the stretch, I didn’t have high expectations of the Mets or the Orioles.  Both teams had obvious issues, neither team exactly strolled into a postseason slot.  Even so, it was still disappointing that they both lost in the Wild Card game.

The Mets had a number of key players who weren’t around by the end of the season – Matt Harvey, David Wright, Neil Walker, Jacob deGrom and Steven Matz – while Lucas Duda missed significant time to injury.

Jay Bruce was acquired at the trade deadline and struggled for most of his time with the Mets.  He did seem to be coming out of his funk towards the end of the season, we’ll hope that this is a promising sign for next year.

In the middle of August the Mets were under .500 and in 3rd place.  I wasn’t the only Mets fan who was less than optimistic at this point.

But the Mets got production from some unexpected players, including pitcher Robert Gsellman, who bailed out an ineffective Jon Niese in his first game, and then as a starter went 4-2 with a 2.42 ERA.

Seth Lugo, who went 5-1 as a starter from August 19th on, got wins against the Cardinals, Marlins and Nationals.

Considering everything the Mets were up against, I think they did very well to make the postseason at all.

…And perhaps as importantly, to finish with a better record (and a slightly longer season) than the Yankees (84-78) and last year’s World Champion Royals (81-81).

As for the Orioles, I think this one fact says a lot about the O’s season:  Out of 8 pitchers with 10 or more starts, on a team that went 89-73, there were only two pitchers (Chris Tillman & Kevin Gausman) who had a winning record and only 3 (Tillman, Gausman and Bundy) who had an ERA of 4.02 or lower.

The offense was fine as long as they kept hitting home runs.  This team isn’t tremendously well-constructed and it was just a matter of time before it would catch up with them.

In fact, if it were not for the efforts of skip Satsuki Fujisawa, they would not have even gotten a Silver in the women’s world championship… 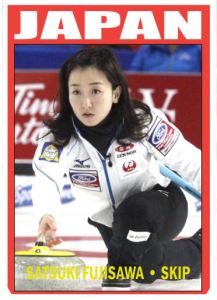 …Oh, wait, this is the wrong post for that.  (Damn Quality Control department.)

The team did get an impressive season from Manny Machado, Mark Trumbo and Zach Britton…

…as well as some promising Major League time from young guys like Joey Rickard and Trey Mancini.

The Mets should be back, unless deGrom, Harvey and Matz don’t come back healthy.  Yoenis Cespedes may opt out of his contract, and I’m not sure that Jay Bruce is the guy to replace him, but we’ll see what happens.

Meanwhile, the Orioles have several free agents including Matt Wieters and MLB home run king Mark Trumbo.  I think Wieters will be elsewhere next year, and I don’t think that’s a bad thing… The money can probably be spent better elsewhere.  Trumbo, I’m not sure what will happen with him.  Playing in Baltimore was clearly a good thing for him, you’d like to think the O’s and Trumbo’s agent could work something out.

OK, let’s close out the post and the season with two more Joe Shlabotnik inserts.

This may or may not wrap up the 2016 TSR set. I’ll be back next Sunday with more customs, but at this point I honestly don’t know what form they’ll take. I do have a couple of more Shlabotnik inserts…

6 thoughts on “A Clearer Perspective On the Mets And Orioles”