…or, “How a PWE lead to an unexpected amount of research”

I got this card in a recent PWE from Shane of “Shoebox Legends”:

It’s a nice card that made me think that I should keep an eye out for more Classic cards… which then made me realize that I don’t have any wantlists for Classic because I don’t have the sets loaded into in my personal database.  All I had is the list of cards I owned from back in the 1990’s  (i.e. 1991 Classic:  cards 98, 100, 110…)

So I started getting information ready to load into my database. 1987 and 1988 are relatively straightforward… There are four distinct sets with four different border colors, but they’re all numbered consecutively so it’s all good.

It was when I got to some of the later sets that I started to realize I might have to do a bit of digging.

I did get it largely sorted out and will lay my findings out for you – with a disclaimer that even though I spent a couple of hours working on this, but I don’t consider this exhaustive.  Too much of it came from other sources rather than first-hand knowledge.

Now for those who don’t know, these cards are meant to be part of a baseball trivia game; each card has several questions of varying difficulty which (if I’m understanding this correctly) will get you a single, double, triple or homer when you correctly answer the question… Kind of a baseball version of Trivial Pursuit.

The key thing to understand is this:  First off, there are Classic sets which were issued with a full-blown board game in a board-game-sized box.  These sets are generally 200 cards or so, weren’t issued every year, and the ones from 1991 and 1992 came in serially-numbered boxes and called “Collector’s Edition”.  There are also smaller sets which were often, but not always, called “Travel Edition”.  These came in smaller boxes (cardboard at first, then plastic clamshell) which one could bring to a friend’s house or with you on vacation or whatever they had in mind with “Travel”.

Once I got an understanding of this, the rest more or less fell into place.

By the way, I don’t have examples of all of these sets in my collection, so I’m going to try to use images from COMC… something I’ve had mixed results with in the past, so if you get a little blank space instead of a card image, then either COMC or I did something wrong.

According to the Standard Catalog of Baseball Cards, about a third of these sets were printed with green backs instead of the intended yellow;  these erroneous (?) parallels carry something of a premium. 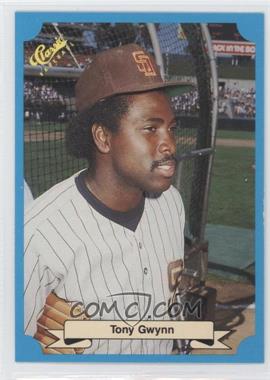 1989 maintains the pattern but complicates things some. You’ve got the 100-card “Second Edition” board game set, which had pink and light blue borders. 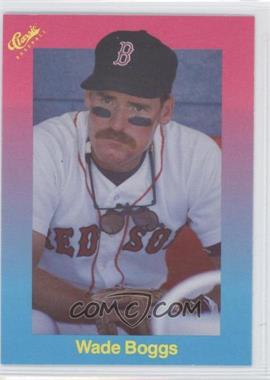 There are also two “Travel Edition” sets that can be legitimately be considered updates or series.  The first is the orange-bordered update numbered from 101 to 150…

…The second is grey/purple-bordered and numbered from 151 to 200.

By the way, this design amuses the hell out of me because you could take any random person who was around in 1990, show them this card with the year covered, and they would be able to tell within a year or two when this card was manufactured.  Some people make fun of the 1970’s, but the 1990’s were just as bad in the colorful cheesiness.

Next up is the aforementioned Pink Travel Edition Update Series 2 blah blah blah.  This set is numbered from T1 to T49, plus unnumbered instruction card which features a “Royal Flush” with Mark Davis and Bret Saberhagen on the front.

And THEN you have the 100- card yellow set that isn’t labeled on the packaging as a “Travel Edition” but still prefixes the card number with a “T”, and also starts with T1… plus there’s an unnumbered Mike Marshall instruction card, and an blank-backed “Four-in-one” card for 101 cards in total. 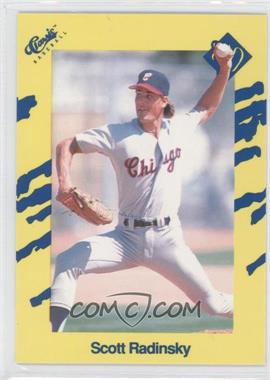 In 1991 there were four distinct sets, the first of which was the purple “Collector’s Edition” that came in a full-sized game box numbered to 100,000.

In addition there were Series 1 (blue, which some sources consider “1991 Classic”)… 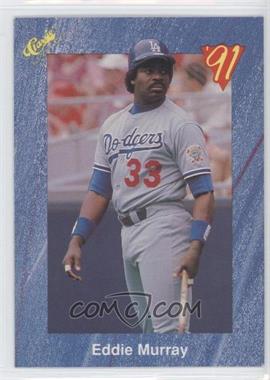 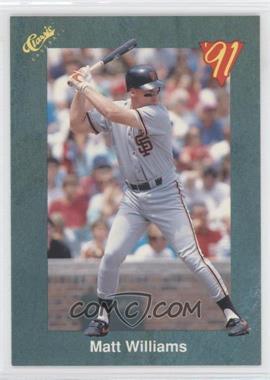 Series 2 and 3 are also referred to as Travel Editions, although when I looked at the original packaging in several eBay auctions, it doesn’t seem to say anything about being a “Travel Edition”. To add to the fun, the green third series has a different back design. 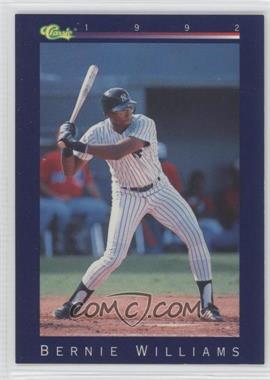 This is also referred to as “Collector’s Edition”, “Base” or “Game”.

In addition, there are two Update/Travel sets, the Series 1 white set…

…and the Series 2 red/blue set

The final Classic set in 1993 has just one travel-esque set numbered from T1 to T99.

So that’s my rundown of the 1987-1993 Classic sets as I currently understand them.  The way things have been going with this post, I’m going to publish it and then learn a few more new facts about these sets.

These cards strike me as something that generally appeals to player and team collectors, but I could be wrong about that. Does anybody have complete sets that they own because they like them and not just because they got them for next to nothing at a card show (something I’ve seen numerous times before).

Has anybody actually played the game?

8 thoughts on “A Classic Case Of Confusion ”