It’s funny how some things just fall together… These customs all worked out to come together into one largely rhyming post title.

“Cole” is Gerrit Cole, who was traded by the Pirates to the Astros for several players, including potential Shlabotnik favorite Colin Moran (who is B.J. Surhoff’s nephew, so for the time being he’s a “legacy” favorite guy.) 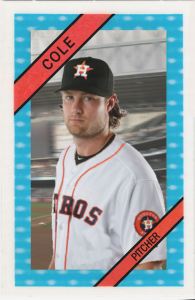 This has been a rough year for my “Hot Stove” set because there has been relatively little player movement, and when someone does move I can’t find suitable photos or don’t have time to do it properly. I ended up rushing through this one a little bit; you might not see it (or maybe you do), but it bothers me a little. Not enough to stop me from posting it, though.

Next up, “Holds”… I’m continuing my 2017 MLB Leaders series of ersatz 1972 customs with this unofficial stat designed to measure a middle reliever’s effectiveness.  A pitcher gets a Hold by coming into a game with a lead of no more than three runs, getting an out and maintaining that lead (but does not earn a save in the process).

As it turned out, there were three MLB pitchers who tied for third, and that threw me for a loop. I didn’t want to change the design of the card, so I went with the floaty head option, which I think works pretty well.

The Twins’ Taylor Rogers lead the Majors with 30 holds.

Coming up next is Nick “Hubba Hubba” Vincent with 29 holds. No, I don’t know why he’s called “Hubba Hubba”, but I’d like to find out (I’ll be really impressed if it has anything to do with the song “Happy Boy” by The Beat Farmers).  If you’re like me and had never heard of Vincent before, a major factor is that he has almost no Major League cardboard. He was in that 2015 Platinum Series collectible card game – remember that?  The other card he had, oddly enough, was an autograph card in 2016 Topps Update. Of these five players, only Andrew Miller has any significant cardboard representation over the past two seasons.

Late New Year’s Resolution:  Feature more guys like these on custom cards in 2018.

These next two customs were last minute additions and are an excuse to feature some new A’s alternates that I really like. These new unis are meant to commemorate the 50th anniversary of the team’s move to Oakland and they are Kelly Green, the green they used to wear in the 1960’s and 1970’s.

I don’t know what pro sports teams have against Kelly Green, but I love it.  It seems like teams are either going with “Midnight Green” (the Philadelphia Eagles) or “Neon Snot Green” (the Seattle Seahawks).

There’s a cap which goes with the jersey;  I’d prefer it have a yellow bill, but this is actually a nice throwback to 1968, when they wore solid green caps (only those caps had just “A”, rather than “A’s”.)

What encourages me the most about this unveiling is that the three players involved in the unveiling all seemed to really like the change, and came out in favor of wearing them more than just for the planned Friday night home games. As far as I’m concerned, they can wear these in all of the games.

I’ve been working for a while on this sheet of U-KNOW-M stamps – “You love ’em because U-KNOW-M!”… Remember to look for U-KNOW-M stamp albums at your favorite virtual retailer! 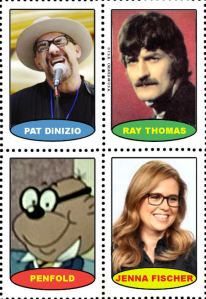 I normally mention these from top to bottom, but since I have a bit to say about the two musicians who have passed away fairly recently, I’ll touch on the bottom row first.

Without getting into details, the other day something made me think of Penfold, the generally useless hamster assistant to Danger Mouse, the star of the British cartoon series of the early 1980’s.  Even though my friends and I were technically a bit old for DM when it aired on Nickelodeon, we appreciated the silliness and wordplay.  Since I’ve wanted to include more cartoon characters on these stamps, and “Penfold” fit right in with the “Cole, Holds” theme, he gets a spot in the checklist.  Cor!

I stumbled across this photo of Jenna Fischer promoting her latest project and I remembered how much of a crush I had on her during The Office.  I considered her for my list of current-day “Charlie’s Angels”, but her appeal is more along the lines of “High school sweetheart you were lucky enough to reconnect with” than “fantasy one-night stand”.

Moving on to the “Passing Souls”…

One night in December I got in my car to drive somewhere and the SiriusXM Beatles Channel played a Smithereens cover of “All I’ve Got To Do”, followed by the news that Pat DiNizio had passed away… It came as a surprise to me, as I hadn’t known he’d been in poor health.  The Smithereens were one of my favorite bands of the 1980’s… “Green Thoughts” was one of the first CD’s I ever bought, and I loved it so much that I went back and filled in the catalog (It took a little while to find “Beauty And Sadness” and “Live At The Ritz NYC”).  If there’s a bright spot to this, I just discovered that there are all kinds of download-only Smithereens live albums available, so I’m going to have to find that iTunes gift card which is undoubtedly buried in desktop clutter…

This is the lead track off of “Green Thoughts”:

Another sad loss from the music world was the passing of The Moody Blues’ Ray Thomas. For years the Moodies were ignored by the Rock HOF, and sadly when they are inducted the band loses a founding member before the ceremony.

I became a fan of the Moody Blues during the late 1970’s, when the band wasn’t active… My best friend had acquired a car with an 8-Track player in it, so he raided his parents’ collection and one of the tapes we got into was the compilation “This Is The Moody Blues”.  We knew some of the songs, like “Nights In White Satin” but came to love every track.  A couple of years later the band reunited and released “Long Distance Voyager” and I have never looked back… although I still feel that the seven albums released between 1967 and 1972 are the only Moody Blues albums which really matter.

Among the songs which Ray Thomas wrote and sang lead vocal was “Dr. Livingstone, I Presume”, and I found this clip of that song (along with “Ride My See Saw”, also from In Search Of The Lost Chord) from French TV in 1968.