Because I don’t have time to write a deeply insightful post, I’m going to fall back on one of my ongoing series… in this case, “Contrast And Compare” in which I highlight Topps cards and their close relatives.  Today, it’s Burger King sets of the late 1970’s.

…Starting with Jim Spencer from the 1978 Burger King Yankees set.  Obviously these cards were produced by Topps.

Spencer was coming off his second Gold Glove season with the 1977 White Sox, and was obtained by the Yankees in a five-player late 1977 trade where Spencer was the only one who would play in the Majors after the trade.  Spencer would appear in only 71 games for the 1978 Yankees with only 15 games playing at first.

Here’s Spencer’s 1978 Topps card which shows him in those regrettable White Sox uniforms:

Al Oliver was a key member of the Pirates from 1969 to 1977 before being sent to Texas in a four-team trade which also involved Bert Blyleven, Willie Montanez, Jon Matlack, John Milner and Ken Henderson.

Oliver would play four seasons with the Rangers, two as an All-Star.  Perhaps he welcomed the trade;   after all, he looks kinda bored on his 1978 Topps card:

Guidry was coming off of a phenomenal Cy Young Award season;  this career Yankee got a different card even though it wasn’t completely necessary. 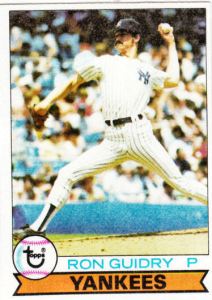 If you think the photo used for the Burger King card seems familiar, that’s because it was also used in 1979 Topps — but on a Record Breaker card: