This past Friday Ryan Cracknell of Beckett tweeted the early details for 2018 Topps Archives and this got me excited.  Not only would the designs picked determine how much Archives I’m buying this year, but it also reminded me that I’d written a post last year theorizing about how Topps selects designs to use and then using those theories to try to determine which designs they would use the following year (i.e. 2018).

To recap for those who don’t want to click on the link, here are my two theories and some ground-rule assumptions I also used…

There is a 15 year exclusion window surrounding a given year’s Heritage design;  Topps will not use a design from up to 7 years before or 7 years after the design used for Heritage.  For 2018, that means 1962 to 1976 is out of bounds.

So, let’s see how Nostradamus-y I was… 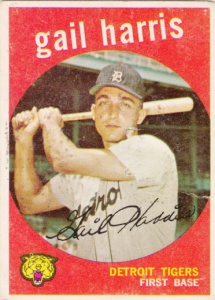 What I said then:  “It’s a popular, easy-to-replicate design which wouldn’t necessarily require a posed photo.” 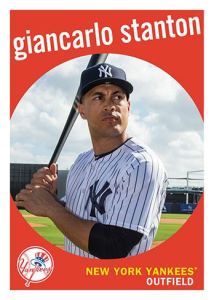 …and from the sample it looks like they did a good job.

What I said then:  “This seems to me like an easy-enough design to replicate, and it’s one that a lot of people have asked ‘Why not?’ and I can’t think of a good answer to that.”

Nit-picky time… Even if the Nats wear a navy cap with a white front panel (and I don’t think that they do, but I could be wrong), it’s not what people associate with the team.

What I said then:  “1993 will be 25 years old next year, so I think they’ll continue the trend of using the upper limit of their ‘window’.”

Ah, well… Two out of three is still pretty good.  However, “pretty good” is not a phrase I’d use to describe this attempt at the 1977 design.  OK, I know it’s a sample and they’ve tweaked designs between sample and production before… but the colors are completely wrong for the Astros, and the font isn’t anywhere close enough for me to give them a pass.  Hint to Topps:  Italicized Arial Black is still not correct, but is much better than what you’ve got here.

Last June I also picked three designs I wished they would use.  Two were doubtful… Doing Archives versions of 1956 and 1978 would pose more challenges than Topps seems willing to take on for this set… But I thought the third wish wasn’t unreasonable:

1988 Topps has an anniversary this year and is an easy design to replicate, but there’s a bit more work involved when creating each card because the player’s head has to be “in front” of the team name.  Maybe that’s a little too labor-intensive for a relatively low-effort set like Archives.

But that’s all good from my standpoint… I’ve been thinking of doing some 1988-style customs, but was holding off until I was pretty sure that Topps wouldn’t be doing anything like that themselves.  I’m confident enough now that I’m releasing my own pre-production sample that I whipped up in an hour or so this past weekend:

I specifically went with a team which didn’t exist in 1988 to emphasize that this is “from scratch” and not just digital manipulation of an existing card.  There’s still some tweaking to be done, but I’m happy to revive one of my favorite 1980’s designs.