Two weeks ago saw the Major League debut of Rays outfielder Johnny Field. Aside from the fact that “Johnny Field” sounds like a line of sports-related playsets from the 1970’s, I was also surprised because I have his 2013 Panini Prizm Perennial Draft Picks card that I pulled from a repack. Admit it, it’s not every day you see those guys make it to the Majors.

For any Johnny Field fans out there, I’ve seen numerous cheap autographs of his out on COMC.

Something I hadn’t discovered until after I’d uploaded these images – Mets pitcher Paul Sewald is from the same high school in Las Vegas as Johnny Field! Holy coincidence! 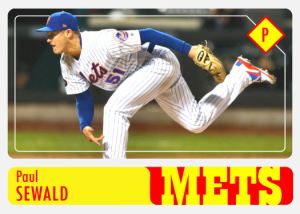 Sewald is here because I liked the photo and because he’s got some pretty nice stats for a middle reliever… in 11.2 innings he’s struck out 14 while giving up just 7 hits and 2 walks.

Speaking of stats, I was going to feature former Oriole Ryan Flaherty because he was leading the NL in batting average… but at this point it’s emphasis on *was* because he’s fallen off and is now 17th in the league with a .304 batting average.

The Orioles have been something less than inspiring this season, and I’ve pondered a series of “Wish the O’s still had this guy” customs.

Regarding players the O’s still have… One of the relatively few bright spots of this ugly season has been reliever Richard Bleier. Bleier’s in his third season (second with the O’s) and still doesn’t have enough career innings to qualify for an ERA title, but that doesn’t take away from the fact that he’s got a 2-0 record – remember that the O’s only have 7 wins all together – and has given up just one run for a 0.54 ERA .

Like Blier, Yolmer Sanchez is one of the better players on a team with only 7 wins… and he’s our featured glasses-wearing player of the week.

He’s also mislabeled as a 2nd baseman because I didn’t do enough research into what position he’s playing this season (which is 3rd).

Jeff Banister gets a manager card because I don’t see the Rangers very often and prior to this week if you’d asked me who the Rangers’ manager was I would’ve said “Uhhhhhhhh…..”

I hadn’t realized how dependent I was on manager cards until they went away.

I needed an insert for this pack so I went with this custom of Charlotte Caslick, who is – so I’ve read – one of the best women’s Rugby Sevens players in the world.

I just know I saw the photo and said “That is a photo that needs to be made into a custom.”