There was a bit of a conversation on Twitter regarding 1978 Burger King cards which act as a sort of ersatz “Update” for 1978 Topps, and that inspired me to get off my butt and share a couple of these cards, plus two more from 1979.

John Lowenstein came up with the Indians and spent the first 8 years of his career in Cleveland, which is what is reflected on his 1978 Topps card…

…Before being shipped off to Texas in a trade involving David Clyde and Willie Horton.  Lowenstein’s 1978 Burger King card (issued as part of a Rangers team set) reflects that.

Lowenstein would spend one year in Texas before being selected on waivers by the Orioles.  “Brother Low” would become a fan favorite and World Champion in Baltimore.

The Yankees signed Rich “Goose” Gossage as a free agent in November, 1977.. That was early enough for Topps to get their artists to do a head-to-toe job on Gossage’s Pirates uniform – aside from the fact that Gossage pitched for the Bucs in 1977, you can kinda tell from the pillbox-y shape of his Yankees cap.

Something which just occurred to me;  does the fact that his sleeves were airbrushed mean that the original photo features a gold undershirt?  You’d think that if the sleeves were black they’d just leave them as it is.

For the Burger King Yankees set, the airbrushed action photo is replaced by a real portrait. 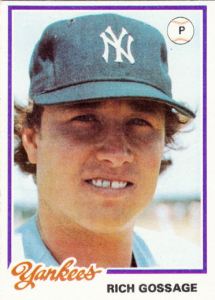 Moving forward a year, we have Doug Bird wearing a Royals uniform in the 1979 Topps set…

…But he was sold to the Phillies on April 3rd, 1979 and the 1979 Burger King Phillies set has him in an airbrushed Phillies cap.  It’s interesting that the BK sets were “put to bed” late enough to reflect an end-of-spring-training deal.

It’s a pretty decent airbrush job, as well… although the pinstripes are missing from the “home” uniform.

For the Burger King Phillies set, the team card was replaced by a card of manager Danny Ozark.

Interestingly enough, there was also a 1979 Burger King Yankees set, but that set did not include a solo card for manager Bob Lemon.  Instead, there was a team card which had the same front as the Topps team checklist card, but the back featured a list of Yankees team records instead of a checklist.