The subject of 1977 O-Pee-Chee baseball came up on Twitter the other day, so I figured I’d take inspiration where I could and I decided to write another in a series of posts about 1977 O-Pee-Chee Baseball.

1977 OPC is a 264 card set that, like most OPC baseball sets, is a sort of parallel of the same year’s Topps set.  Unlike other years – probably because it was the first year of the Toronto Blue Jays – OPC was updated and contained many different Blue Jays and Expos than the Topps set.

I’m kind of surprised I hadn’t featured the Gary Carter cards before.  Here’s his 1977 Topps card: 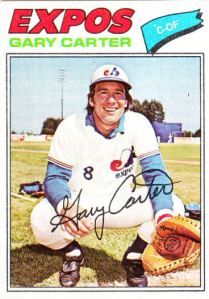 For reasons unknown, OPC replaced the catching photo with a batting photo.

I think I like the catching pose better, but then again if OPC hadn’t have updated the photo I never would’ve tracked down that card.

Pete Vuckovich, who had been taken from the White Sox in the expansion draft, had a particularly unflattering photo in 1977 Topps.  They didn’t even bother to try to airbrush over the black White Sox jersey. 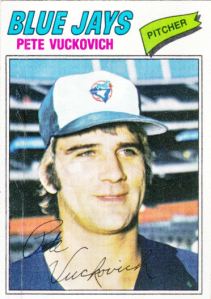 Vukovich was a reliever with the Jays, but a couple of years and a couple of teams later he would win the 1982 AL Cy Young Award while with the Brewers.

Pedro Garcia was with the Tigers in 1976, but was released during the offseason

And here’s his O-Pee-Chee card:

Since the pose is so similar, I wonder if when they were doing OPC someone said “Hey, hand me that photo of Dock Ellis where he’s standing with his hand in his glove.”

Something about this photo on the OPC struck me as odd and it took me a few minutes to realize what it was… and it was actually two things.  First off, the spacing is unusually wide between the letters in “NEW YORK” on Ellis’ jersey;  and second, just the fact that Dock Ellis is shown in his Yankees road uniform was pretty unusual in itself.  I did a very quick review of Topps Yankees cards from 1974 to 1978 and out of what must be more than 100 cards there I counted just 7 which showed the road uniforms.

3 thoughts on “Contrast And Compare: Another Four From 1977 O-Pee-Chee Baseball”