When I was growing up my family lived in the suburbs of Long Island but all of my aunts, uncles and cousins lived in New York City… primarily in the borough of Queens. A couple of times a year we’d go into Queens for visits, and during all of the driving around I would see a lot of Queens landmarks from the back seat of our Pontiac Catalina. For the most part, the view was uninspiring, but there was one particular area, near where the Grand Central Parkway and Long Island Expressway meet, where the buidlings were noticeably different from anywhere else. I didn’t know what these odd structures were, but I mentally assigned them names like “The Capital T” and “the pies on stilts”. My parents said they were from The World’s Fair, but that didn’t really mean anything to me until I was older.

Much like “The City” refers to Manhattan in any part of metro New York, “The World’s Fair” refers specifically to the 1964 World’s Fair, which had been held in Queens on the same grounds as the 1939 World’s Fair. I attended the 1964 World’s Fair… technically speaking.  I was in a stroller and don’t remember any of it first-hand. Over the years, however, I’ve seen enough of the surviving bits of the fairgrounds to have developed a certain fascination with this international event. 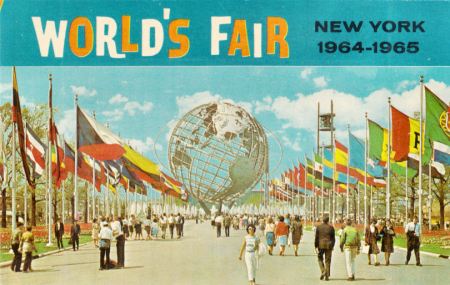 For me, it goes beyond the actual physical remnants of that World’s Fair. I grew up fascinated by futuristic concepts, particularly that 1960’s idea of THE FUTURE… That Space Age-y “Tomorrowland” type of outlook which made us think that by the 21st century all of the buildings would be modular bubbles, and we’d be commuting in our flying cars and vacationing at orbiting space station resorts.

As much as the 1964 World’s Fair resonated with me, I’d never really collected anything connected to it.  It wasn’t until I was getting ready to leave my first postcard show (in 2017) that I I stumbled upon a postcard from the 1964 World’s Fair and made a mental note that when I came back next year I would make this something I’d look for the next time around (i.e. this most recent postcard show).  The postcard above, which shows the “Swiss Sky Ride”, was the first postcard I ran across.  Even though it didn’t represent anything that I personally remember or h ave a connection to, I decided to get it anyway just because it had that World’s Fair vibe and gave a good bird’s eye view.

The Unisphere, a stainless steel 140-foot globe, was used as the symbol of the World’s Fair, and has had more than it’s share of pop culture references, appearing in movies, music videos and on album covers.  Over the years it’s also become an unofficial but universal symbol of Queens.

Picking up these postcards has been something of an education for me. As a kid, I thought of the building in the next postcard as “The Capital Letter ‘T’” building because of it’s shape. When I got older I found out that it was a restaurant/catering hall called “Terrace On The Park”. However, it wasn’t until I saw this postcard that I found out… 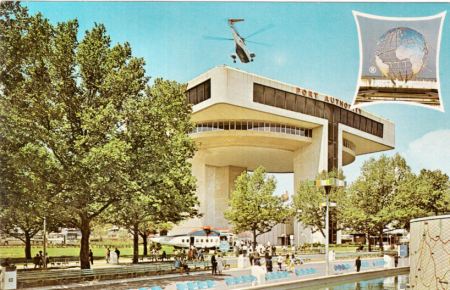 …Holy crap, it was a HELIPORT?!?  As you can see in the photo, it’s labeled as the “Port Authority” building and was used to connect the World’s Fair to the airports.  I suppose it’s not surprising that I didn’t know its original purpose;  after the World’s Fair was over, there wasn’t a whole lot of need for people to fly their helicopter to this area.

This postcard features the New York State Pavilion from the World’s Fair. I find this the most interesting of the postcards.

The “Astro-View” observation towers on the left can easily be seen from the Grand Central Parkway are are what I thought of as the “pies on stilts”.  At nighttime there is (or was) a single red light on top of each, which made me think of a cherry on top of a pie.

The large colorful structure at the center of the card was called the “Tent Of Tomorrow”. I don’t remember ever seeing the colorful canopy shown here, I only remember cables suspended in a bicycle wheel pattern. The floor of the pavilion featured a giant road map of New York State.

The Pavilion was a key part of the movie “Men In Black”, appeared in the 1978 film “The Wiz” and was the location for They Might Be Giants’ “Don’t Let’s Start” video.

One last postcard features a landmark which was adjacent to the fairgrounds, used by the World’s Fair and shared the same kind of Space Age-y “1960’s Futuristic” visual design… Shea Stadium!

Shea was cutting-edge for the time;  the stands could be moved around into a football configuration (for the Jets) and the scoreboard was originally designed to allow for images to be projected on to a screen at the top.  The projected images ended up not working as hoped for, and the screen was replaced with Mets and Jets logos (anyone familiar with the Shea scoreboard should know what I mean).

The Mets did their share in promoting the World’s Fair;  they wore big patches on their left sleeves during the 1964 season.

That covers the World’s Fair postcards I got. I’d be satisfied leaving this collection as it is, given that I have at least one postcard of everything I would like to have a postcard of, but I’ll likely keep an eye out for others just to see if any caught my eye.

Does anybody else have memories of the 1964 World’s Fair or of what remains of it?