For those who are new to this series, here’s the premise: I’m fleeing to an uncharted desert island to evade the reach of The Powers That Be, those who wish to silence me because I know THE TRUTH about William Howard Taft, the 27th president of the United States, having secretly been an alien from a planet somewhere in the Crab Nebula.

All I’m able to bring with me to the desert island is the bare essentials plus one binder worth of 1980’s baseball cards.

Let’s fill some more sheets in this binder!

There are a lot of people who have harsh words about 1989 Bowman.  A lot of people don’t like cards which are larger than standard size, plus the cards are often just head shots and feature a design which is either “minimalist” or “boring” (or both).

Me, I kinda like it. I still have the hand-collated set I bought in 1989, and besides, a set that has this card in it can’t be *all* bad… 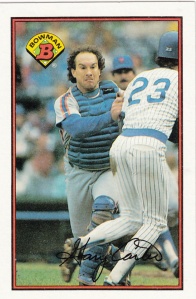 I’ve been toying with the idea of having a recurring theme of ‘cameo appearances’ like Ryne Sandberg on this card.

…and on I think he was also on someone’s 1988 Score card (but I don’t remember whose). Any other 1980’s cameos I could be featuring here?

Speaking of Ryno cameos… He’s probably on this 989 Score card highlighting the first-ever night game at Wrigley Field, but it’s not like you can tell for sure that one of those little white blogs is Sandberg.

Wrigley Field was, of course, the last ballpark to get lights. The first night game was originally scheduled for August 8th, 1988 – making the numerical date and easily-remembered 8-8-88 – and the game against the Phillies started but got rained out in the 4th inning. The next evening’s game against the Mets ended up being the first official night game at Wrigley.

No binder of 1980’s cards would be complete without the infamous Rod Carew cards from 1982 Topps and 1982 Fleer. This was a big scandal back in the day.

Apparently – and I’ve never heard specifics on this situation – a photographer sold the same photo to the two different companies.

And both companies used the photo.

And, had Homer Simpson existed in 1982, both companies would have said “D’oh!”

If there was any fallout from this, I never heard about it… but I’m thinking that Topps and Fleer thought twice before buying any more photos from this photographer. 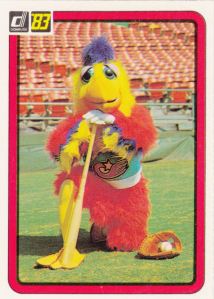 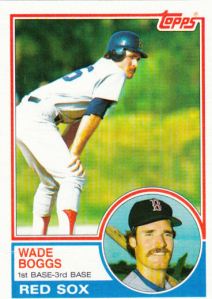 In the mid-1980’s there was an ownership group which was trying to position Denver as a MLB-ready city (this was, of course, before the Rockies). I’m a little sketchy on the details these days, I can’t remember if they already owned the AAA Denver Bears and were trying to position themselves for MLB, or if they started out with MLB designs and bought the Bears as a step towards their final goal.

Whichever way it worked out, the Bears got rebranded as the Denver Zephyrs – named after a well-known passenger train which ran between Chicago and the Mile High City – and it was clear that their intent was to demonstrate that they’ve got the big league branding (relative to other minor league teams of the day), they’ve got big league uniforms, they had the big league facility with Mile High Stadium, all they needed was the big league franchise.

Even though this East Coast guy never say the Z’s play in person or on TV, I’d always liked the logo and uniforms.  I even got a t-shirt (now long gone) and an authentic game cap like the one Mirabella’s wearing (still have it, but it’s a tight fit now).  When the expansion process started to heat up, it was my sincere hope that the two new National League teams would be the Denver Zephyrs and the Buffalo Bisons.  The Denver franchise went to a different ownership group and Buffalo… Well, Buffalo was just another small market, while Miami…!!  Oh, Miami would become an international gateway to all those baseball fans in the Caribbean, Central and South America.  Right?  Just go ahead and tell me that Buffalo would’ve been so much worse than how Miami has worked out for MLB.  BAH!

Yeah, 25+ years later I’m still a little bitter about that…

After the 1992 season, with the Rockies coming in to Mile High Stadium, the Zephyrs moved to New Orleans and kept the Zephyrs name.  Two years ago they rebranded as (insert eye roll here) the New Orleans Baby Cakes. The upcoming season might be the last for AAA baseball in NOLA as the team will be moving to Wichita, KS after a new ballpark is completed, possibly for the 2020 season.

I feel like we need a goofy Fleer card here, so I’m wrapping things up with this 1986 Fleer card of Mickey Hatcher with a giant glove. The giant glove theme would be repeated on and off over the years.  Just last year there was a giant glove on Dustin Pedroia’s card in 2018 Stadium Club.

Tom Tom Club formed in the early 1980’s as a Talking Heads side project. Talking Heads ceased to be a long time ago while Tom Tom Club remains something of an active band;  I guess as long as core members and rhythm section Chris Frantz and Tina Weymouth remain married and continue to make music.