So there was this political conversation going on at work that I couldn’t help but overhear. I generally don’t get into politics at work (or here, for that matter), but the conversation was along the lines of “WE are unfailingly right about everything and THEY are unquestionably wrong about everything”. I consider myself to be somewhere in between “us” and “them”, but I’ve known the main person in the conversation for years and he would probably categorize anybody who’s not fully “us” as being “them”.  I don’t like to be painted with that broad of a brush… I don’t like ANY groups of people to be painted with that broad of a brush.

Anyway, I could feel my blood pressure going up, but it was fortunately close enough to lunchtime that I was able to flee the discussion and my office.  I went to a big box retailer hoping to find some Heritage High Numbers, but I was out of luck. Since I was looking for a significant distraction, I decided to treat the card aisle as a buffet and sampled a pack each of several sets which were new to me.

First I grabbed a pack of 2019 Donruss Football.  i’d expected the design to be basically the same as 2019 Donruss Baseball, only Football is fully licensed and can go wild with things like team colors and logos.  Oooooooh.

2019 Donruss Football, as is often the case, does look better than 2019 Donruss Baseball. FWIW, the name and position are in silver foil.

I’ve noticed on football cards from the past few years that the players tend to get lost in the crowd background.  I wonder if there’s some differing techniques that the photographer and/or Panini are using (or are not using) that makes the difference, or if crowds just dress more colorfully than they used to.

I also pulled a card of Joe Willie Namath.  As they say in the land of my upbringing, that and $2.75 will getcha on the subway.

Nothing much else to say about Donruss Football, so I’ll move on to the second pack, 2019 Score Football.  The Panini-era Score football cards that I’ve seen have been largely-forgettable 21st century designs, which is why I was surprised that these cards were a 30th anniversary homage to 1989 Score Football.

Like with Donruss “Retro”, these cards are more homage than an attempt to duplicate the originals.  For starters, the originals had a colored border which matched the box at the bottom of the card… Well, here, check out my 1989 Score Flutie:

1989 Score is not a great design to start with, so I’m not going to fault Panini for making changes.  It falls into the category of “It’s fine” and we all move on.

Because it’s slightly more interesting than your typical Panini card back, here’s the 2019 Score back:

These are closer to the originals than the front, with the main difference being that the originals featured a *different* photo on the back… but for $1.99 a pack I guess I won’t kick about that.

The rookies in Score are more along the lines of what I’d expect from 21st Century Score… and there’s no mention of which NFL team owns the rights to said rookies. 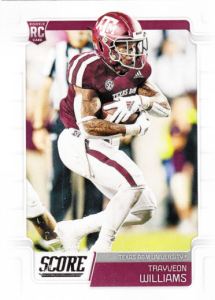 Trayveon Williams is with the Cincinnati Bengals, in case you were wondering. I understand that this is probably done so they can get the cards to market sooner, but it’s a pain for team collectors who can’t easily tell which rookie is *their* rookie.

Wrapping up the Score pack with the one keeper for this Steelers fan: 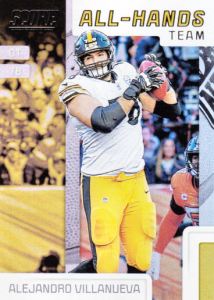 An “All-Hands Team” insert of Steelers offensive tackle Alejandro Villanueva… The card is shiny and not bad looking, but to me “All-Hands” conjures up images of… um… something else.

I also dropped another $0.99 on a pack of Panini Football stickers.  Nothing much to say about the stickers, the stickers are stickers.

It’s on thin cardstock and just your run of the mill throwaway Panini design, but it just caught me off guard because I’d never seen anything other than stickers in a Panini sticker pack.

I should mention that the card is standard-sized, and the stickers are your typical sticker size.

One more impulse buy was involved, and despite it being something I would normally have zero interest in, it ended up being my favorite (relatively speaking) pack of the bunch.

I’m talking about a pack of Panini Fortnite Series 1 cards. Full disclosure: I’m not a gamer and have not so much as seen Fortnite being played.  Some of the preview images I’d seen spoke to me on some level, so I figured I’d spring for a pack. It’s not that different than my buying NBA Hoops cards at the dollar store; I have about as much interest in basketball as I do in video games (not much), I’m just curious about them as cards.

Even though the characters mean nothing to me, I have to say I kinda like these cards…  Well, some of the cards.  I can do without the cards that – I imagine – show gameplay “action”.

Here’s a more interesting card, front and back:

…and look at the size of that card number! No squinting at these babies!

Here’s another one I kinda liked.

The highlight – kind of – of the pack was this foil parallel of… a lamp. 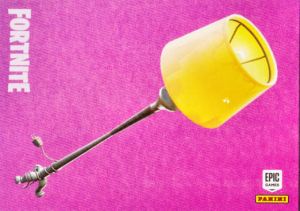 The back of the card lists it under the category of “Harvesting Tool”, so it clearly has some significance within the game… but this card amuses the heck out of me because a shiny parallel of a floor lamp is something which just out-Ginters Ginter. Take that, Egg!

So, to wrap up all of this… I don’t see myself buying a second pack of any of these, but if I ran across a dime box which had Fortnite cards, I’d poke through them to see what they had.

Does anybody else have any experience with these cards?  I’m curious to hear your take!