It’s been a couple of weeks since I did a custom card post and it occurred to me this morning that I need to get going if I want to get more of these done.

I’ve already scrapped my goals to make a custom of everybody to play in a game for the Mets and Orioles, although this is partially because my prior source for good images went away, so it’s much harder to find good photos of relievers and bench players.

At any rate, I figured I needed to prioritize at this point and start making customs of the guys I want to make sure are featured on my customs.

I’ll start with this one of Cubs’ reliever Danny Hultzen. 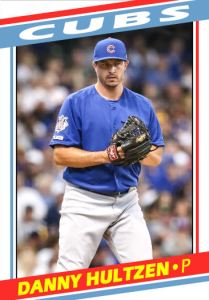 Danny Hultzen was drafted 2nd overall by the Mariners in 2011 – just after Gerrit Cole and just before Trevor Bauer. Along with Bauer, the M’s passed up on Francisco Lindor, Anthony Rendon, George Springer, Brandon Nimmo, Jose Fernandez, Jackie Bradley Jr. and Sonny Gray to draft Hultzen… But Hultzen looked like the real deal… until the injuries took a toll. Hultzen lost two entire seasons to shoulder surgery, so after 8 years in the minors it’s nice to have seen him make his MLB debut.

Last night the Mets beat the Dodgers on a 3-run homer by pinch hitter and reserve outfielder Rajai Davis. 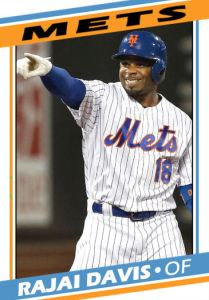 For a guy who has appeared in only 20 games, he’s had a significant effect on the Mets this year. You may remember he made his Mets debut after taking a 2+ hour Uber ride from Pennsylvania (where the Syracuse Mets were playing) to Citi Field, and then helped the Mets win with another 3-run homer.

A former Mets prospect recently made his Major League debut with the Blue Jays. Anthony Kay was sent to Toronto in the Marcus Stroman deal, but I’d already “bonded” to him a little because he (like me) is from Long Island and needs corrective lenses.

Moving on to another Anthony… Anthony Santander was a Rule V guy drafted from the Indians and stayed with the Orioles through the 2017 season. At the time, all of the team announcers called him “san-TAN-der”, but I’ve noticed that this year they’re calling him “san-tan-DAIR”, which is probably correct (or closer to correct) given that he’s from Venezuela and not South Dakota.

I saw Austin Voth pitch in the minors several years ago and was impressed by what I saw. I kept an eye on him as he ascended through the minors, but apparently he wasn’t as high-level of a prospect as I thought. Never mind, he’s in the Majors now, hopefully to stay. 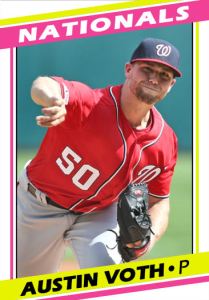 Although I’d made “Expos” customs, I realized with this custom that I had not made a Nationals custom. I’m not 100% thrilled with the colors I’d picked out for them at the beginning of the season – they’re the colors used in 1976 Topps for the Phillies and Angels – but in mid-September I’m not going to worry about that.  After all, it’s just the Nationals.  :-D

These two “Scoops” customs are pretty old at this stage, but I like them too much to let them go unposted:

And I’m going to wrap up with a new custom in what may or may not be a series… Over the summer I worked up a 1973 Topps Football template and had the idea of featuring a “Steeler of the week” custom for my favorite football team. As it turns out, last week’s game against the Patriots was one best forgotten by the Black And Gold faithful, so I’ll burn off this obligatory Roethlisberger custom.

You may be asking yourself “Why is a Steelers fan making a custom like that of the Steelers future HOF quarterback?” And the answer is because I don’t like him and am patiently waiting for him to retire so I can stop yelling at my TV. Yes, I am fully aware that he was a critical part of two Super Bowl winning teams. At this point I’m just tired of him.

I’m really liking the way the 1973 Topps Football design works for customs, so even if I don’t keep up with the “Steeler of the week”, I may just do a “Football player or two of the week”… or even use it for other sports, there’s nothing particularly football-y about the design.  We shall see.