I tend to get overly ambitious on this blog, and it’s done a fine job of completely derailing me. I often start off with a modest idea, but then I think “Oh, it would be better if I added this other card… but I’d have to scan it first” or “I really should research more about that team” or “Why would they include this seemingly-uninteresting player in this small set?” The next thing you know, instead of writing, I’m staring at my computer screen not knowing where to start.

In an effort to break the logjam, I’m going to do a number of posts in the near future where I limit myself to three cards and have, at most, a very simple theme connecting them.

…a simple theme like “Here are three 1957 Topps commons I recently picked up”.

Hobie Landrith has been getting a fair amount of play on this blog lately, mainly through his connection to the Mets; the 31-year-old backup catcher was the Mets first overall pick in the 1961 expansion draft. Even without his Mets connection, I like the way that much of this card is background with Hobie leaning in from the side… and yes, I realize that’s a result of how the photo was cropped, but still…

Don Cardwell was 8-10, 3.01 with the 1969 “Miracle Mets” and his one postseason appearance involved pitching a 1-2-3 6th inning in Game 1 of the World Series (the one game the Mets lost), so he’s not exactly a key figure in Mets history, but I still end up picking up many of his non-Mets cards.  It doesn’t hurt when the card is a simple-but-attractive one like this one. 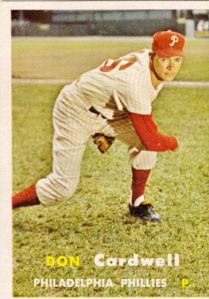 Sometimes on these 1957 cards, the player names can be hard to read (see “Landrith, Hobie”), but this photo is just perfect for the 1957 design.

Wrapping up (already?) with another player who I semi-collect for reasons I don’t completely understand:  Vic Power.  I think part of it is sympathy for the fact that when the Puerto Rican player came to North America they “Bob Clemente’d” his last name.  He also was a very good player who doesn’t get mentioned much, having won 7 Gold Gloves, making the All-Star team in four different years and getting MVP votes in 7 seasons.

Two minor factors in my buying this card are down at the bottom:  1)  Those nice Athletics stirrups and 2) He’s got the ball in his glove while he’s making his fake fielding pose.  Having the ball in the glove seems to have been a “1950’s thing” which fell out of favor, but I like it.