in my last “go ’round” on COMC I went a little crazy with looking for and buying various cards from England… Most of these cards were cards of Footballers (i.e. soccer players), but I also got three cards for reasons which are all tied to TV shows I’ve enjoyed at various times.

Back when I was a kid, I always loved watching The Huckleberry Hound Show… although I watched it a few years after the show’s heyday.  While a Huckleberry Hound short was the centerpiece of the show, there were also other characters in their own shorts, including Pixie and Dixie and Mr. Jinks.

I recently found out that there was a set put out in 1961 by Barratt & Co, and the set featured the various Huckleberry Hound Show characters in different situations, and I was drawn to this odd one featuring Mister Jinks on a soccer pitch talking to Pixie – At least I’m pretty sure it’s Pixie and not Dixie – while giving up an easy goal 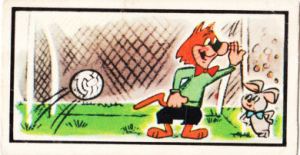 The back says that the Huckleberry Hound Football Club is “having a very bad season” because Jinks spends too much time gossiping rather than keeping the ball out of the goal. Okey-dokey…. 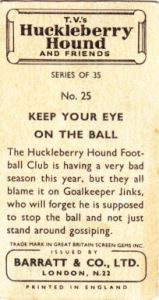 Next up is a 1934 Player’s Cigarettes card of cricketer Leslie Ames, who Wikipedia describes as “one of the greatest wicket-keeper-batsmen of all time”. But that’s not why I got this card.  No, not me. I’ve spent too much of my life watching British TV to get a card like this for an obvious reason.

While I *was* looking to get some Cricketer cards, I saw Leslie Ames and wondered where I knew the name from… and then I remembered that it was used as a reference in a sketch on Monty Python’s Flying Circus. In the “Killer Sheep” sketch, Graham Chapman is a rat catcher who initially introduces himself as “Leslie Ames, chairman of the Test Selection Committee” and informed the occupants that their flat had been selected as the venue for the Third Test against the West Indies. It wasn’t until I saw this card that I realized that Leslie Ames was a real person.

Here’s the back.  I’m not one to pick up cards just because they’re old, but it is pretty cool to own a card that’s 85 years old. 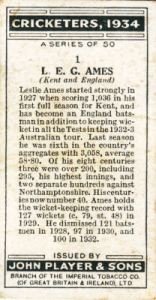 …because it’s all about How To Recognize Different Types Of Trees From Quite A Long Way Away.

Number one… The Larch. 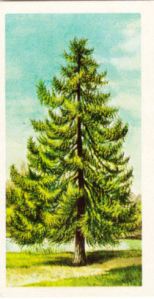 This card comes from the 1966 Brooke Bond Tea “Trees In Britain” set.  To most, the idea of a card set featuring 50 types of trees wouldn’t spark much interest, but I immediately had to look to see if they had the larch… because it amused me, and because I also have a similar card featuring Lupins (“What, d’ye mean the FLOWER ‘Lupin’?”)

If you don’t know what I’m on about, it really wouldn’t be worthwhile explaining it.  Trust me on this one.

Here’s the back of the card.

The Larch. THE LARCH.