So there’s this local card show I bend over backwards to support. This is because, for over a decade, we in Shlabotsylvania didn’t have a show within a 90 minute drive… So now that we’ve got a show that actually *comes back* on a regular basis, I get a little free with my spending…  Relatively speaking, of course, I’m still a cheapskate. I’ve been thinking of somewhat changing my cheapskate tendencies but that’s a topic for an upcoming post.

So anyway, while going through a box at this show I ran across a team bag of eight well-loved cards from 1964 Philadelphia Gum Football. The 1960’s Philadelphia sets have become a recent source of fascination for me, both for their simple but colorful designs and for the non-Topps-ness of the cards. Even though I have no illusions of collecting the sets, I couldn’t resist dropping a couple of bucks on this group.

Of the cards I was looking for from this set, one target had nothing to do with whose card it was, but rather whether there was a Cadillac in the background…

Most of the Cleveland Browns photos in this set have this Cadillac in the background, and the common wisdom is that it’s HOF running back Jim Brown’s Caddy. This background is so much a part of this set’s character that I felt like I had to have one represented in my Football binder.

1964 Philadelphia cards are like 1965 Topps baseball cards in that they the card backs are blue with a prominently-featured cartoon which makes up a visual clue for a trivia question.

Since I don’t want you to strain yourselves in trying to read the upside-down answer, here, as a public service, is the answer to the question “What is John Morrow’s hobby?”

John Morrow was a 2-time Pro Bowler and won a championship with those 1964 Cleveland Browns.

My second-favorite card from the pack is this card of L.A. Rams tackle Frank Varrichione.  These Rams cards are visually appealing with the abundance of primary colors

So why was Frank Varrichione called “Faintin’ Frank” at college?

…Is this implying that Frank faked an injury to get a timeout?  Seems like an odd thing to promote on a card.

Frank Varrichione played for the Rams and Steelers, went to Notre Dame, and played in five Pro Bowls.

Final card, this one isn’t visually stimulating on the front… 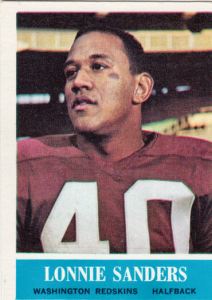 …But I liked the cartoon…

Gosh, I can’t even guess at the answer to the question of the other sport Lonnie Sanders played in college… if only I had some sort of hint…

The card lists Sanders as a halfback, but Pro Football Reference has him as a cornerback.  In 1965 he had four interceptions which he re turned for a combined 121 yards… but none for a touchdown.

When this set came out in the United States, a 17-year-old English musician called Reg Dwight was playing in a band called Bluesology.  Ten years later he would go on to have a bit of success, and would write a song about Billie Jean King’s team in the fledgling World Team Tennis league, the Philadelphia Freedoms.  According to Wikipedia, the song didn’t get released until 1975, after the WTT franchise had moved to Boston.