For the third straight year, I went to a not-really-local (i.e. about an hour’s drive each way) postcard show.  The first time I went, it was something different to do “just because”… but I enjoyed it enough that I went back a second time, and now this third time I came to realize that I have a favorite dealer, so I guess that says something.

I’ve tagged all of my various postcard show posts, if you want to see what I’d gotten previously. 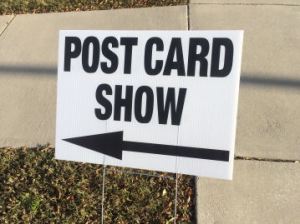 The Cleveland Indians did a series of team postcards during the mid-1970’s, right during my initial introduction to baseball and also coinciding with what are (in my eyes) the best Indians uniforms of all time.  Because of this, I have more Indians postcards than anyone who isn’t an Indians fan would normally have, but I’m just enjoying the heck out of these things.

This 1974 Postcard of Frank Duffy caught my attention because of all the groundskeeper-y items in the background like hoses and rakes (and implements of destruction – couldn’t resist an “Alice’s Restaurant reference) …Just a fun “behind the scenes look”.

I have a modest collection going for former All-Star and 20-game winner Fritz Peterson, so I quickly grabbed this 1976 Indians postcard of Fritz.  This is the third Fritz postcard in my collection;  one Yankees and two Indians.

Back in 1985 I saw a pitcher by the name of Johnny Abrego pitch for the Pittsfield Cubs of the AA Eastern League.  That same season, he pitched 6 games as a September call-up, and given that I was new to minor league baseball at the time, this was enough to cement him as a guy to keep my eye on.  It also didn’t hurt that “Johnny Abrego” sounds like a gunslinger from a TV show like Gunsmoke.  “Sheriff, I hear that Johnny Abrego’s gunnin’ for ya!”

Unfortunately, Abrego battled injuries after that, retired at the age of 24 and that September stint turned out to be the entirety of his MLB career.

So here’s the thing:  I officially collect Johnny Abrego, but there honestly isn’t much of him to collect.  Prior to this weekend, my Abrego collection consisted of this 1986 Donruss card.

Now, I’m proud to say that I’ve DOUBLED my Abrego collection with this 1986 TCMA “Stars Of The Future” postcard.

According to Trading Card Database, the only card left for me to get is a a card from the 1986 ProCards Iowa Cubs team set …but don’t hold your breath.

Among the baseball-related postcards I *didn’t* get were some Exhibits of players like Phil Rizzuto and Bob Lemon.  I gave some thought to picking up the Rizzuto, but I don’t know enough about Exhibits to be sure whether i was getting a deal on a vintage card or paying way too much on a reprint.  There were also a number of Exhibits of celebrities which looked neat, but I didn’t know whether there are any famous movie stars of the day that I might have wanted to look for.  I’m mentioning this as a note to “2020 Me” to brush up on Exhibits a little bit before heading to the next postcard show.

OK, now on to the World’s Fair postcards.  As I’d mentioned in prior posts, I’ve held a lifelong interest in the buildings that had been left over from the Fair, especially the Unisphere (the big stainless steel globe which has become a symbol of the Borough of Queens).

The first postcard is of what I used to think of as “The Capital T Building”, but which had been the Port Authority Heliport and “Terrace on The Park”, a restaurant/catering hall with views over the whole Fair.

A night view of the aforementioned Unisphere…

Another view of the Unisphere, with the New York State Pavilion’s Tent Of Tomorrow and Astro-View observation towers in the background on the right…

The last postcard I’m featuring is a view of the Fair as taken from one of the  observation towers.  In the distance on the left, you can see a brand-spanking-new Shea Stadium.

Just like I like a baseball scorecard which has been used to score a game, I enjoy postcards which had been mailed – Even though there’s a little bit of a “I’m reading someone else’s mail” feeling… Enough so that I’m not going to share the note or address (which wasn’t terribly exciting anyway).

However, there is a very cool Project Mercury stamp with a World’s Fair postmark.  I’m pretty sure I’ve got this same stamp in my stamp collection from high school (not that anybody really cares, I suppose)

So that wraps up this year’s Postcard Show recap.  I know that these shows are not anywhere as common as sports collectibles shows, but if you find out that there will be one near you, I encourage you to go check it out… just keep in mind that every dealer organizes their postcards differently, but every one I’ve run across has been very happy to help you find whatever you might be looking for.