I’ve got a number of recurring posts based on a particular theme… Dead Parrots, 1961 Mets Prequel cards, plus a couple of others… but right now I don’t have time for any of the research, scanning and such, so we’re just going with a basic “Hey, check out these cards!” post.

Slowly but surely I’ve been attacking the 1970 and 1971 Topps “Super” sets. At some point I’m going to run out of cheap cards to acquire and have to bear down and shell out money for the HOFers, but I’m not there yet.

In light of that, here’s my most recent ‘Super’ acquisition, a 1970 Rico Petrocelli 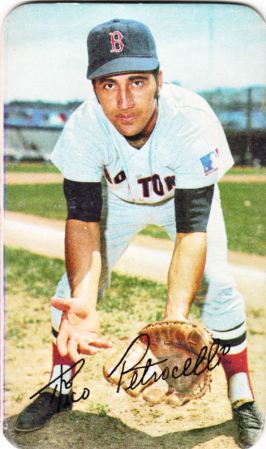 I honestly don’t know why people don’t love these cards as I do; especially given how much better than his regular 1970 card this photo is (for those who don’t feel like looking, the answer is “a lot”). After I puzzle over that for a moment or two, I remember that if more people loved these like I do, then I wouldn’t be finding cheap copies anywhere, so I tell myself to shut the hell up.

Back this past March, while researching a post on the 1977 Topps San Francisco Giants team set, I discover a pitcher with the awesome name of Tommy Toms.  Toms never had a Major League card, but he did have some Pacific Coast League cards produced by Cramer Sports Promotions, a company which would become Pacific Trading Cards.  I did a quick hop over to the COMC website and picked up this 1976 Cramer Phoenix Giants card…

Before I move on, here’s the back. Nothing exciting, but certainly adequate for the job.

I generally wouldn’t buy a current card of Omar Vizquel, but this is such a nice photo, and it was in a dime box, so I couldn’t walk away from it.

That’s all I really have to say about the card.

Here is the latest in my small collection of curling cards… I think I’m up to an even dozen now. This is from the “Did You Know” insert set to the 2018 Topps US Olympic and Paralympic Team and Hopefuls set, and it features a photo that I’m thinking was from the 2014 Sochi games when the US finished at the bottom after going 1-8 in round-robin. From left to right this is John Landsteiner, John Shuster and Jared Zezel. Shuster and Landsteiner were part of the team which won Gold in PyeongChang, Zezel was not. 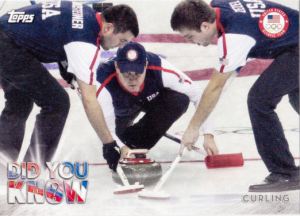 If you want to know the answer to “Did you know”:
Curling stones (aka “Rocks”) are granite blocks originating from only two sources: Alisa Craig (an island off the coast of Scotland) or – to a lesser extent due to environmental conerns – the Trefor Quarry in Wales.