…But the police were not called.

I’d had a long day yesterday and came home and plopped myself on the couch as soon as I got home.

Mrs. Shlabotnik came home after I did and got the mail.  While she was going through the envelopes in the other room, I heard her say “OOOOOOOOOOOOOOOOOOH!”  Shortly after, she came over and handed me an envelope from CommishBob from The Five Tool Collector.

Now she wasn’t Oooh-ing the fact that it was from Bob… Mrs. S is a long-time Orioles fan and she very much appreciated the 1990’s Orioles logo on the return address label on the envelope.

She wanted me to let Bob know how much she liked the address labels, and my husbandly duties have now been fulfilled.

Within the envelope was a single card and a note from Bob, which read:

“Been holding this for you for the longest hoping I’d have more to send.  I need it gone.  ’69 Mets stuff gives me the hives”.

After a laugh, I then looked at the card and saw this…

FANTASTIC!  For those who aren’t familiar with the card, this is a 1967 Topps “Mets Maulers” card signed by the two subjects: Ed Kranepool and Ron Swoboda.

The card itself is interesting… it’s signed in ballpoint instead of Sharpie, and it’s lightly creased which makes me mentally conjure up images of a card being signed before a game, and before the day when such autographs were immediately enshrouded in plastic.  Might just be my nostalgic brain kicking into overdrive, but it’s a narrative I’m enjoying, so I’ll let it be.

Thank you very much, Bob!  This card will certainly get a honored spot along with my vintage Mets team sets

As long as I’m here and actually using my scanner, I have some other cards to share…

On Monday I was feeling the need to open some wax packs;  although I was at a show two weeks ago (and someday I may have time to scan those cards) I have not opened a pack of anything since November.

I ended up getting two packs of 2019 Topps Update at the local-to-work Target store.  Now they were loose packs at a big box retail store, so I knew that these packs had been felt, weighed and analyzed withing an inch of their little waxpack-y little lives.  I decided to go ahead and buy them anyway.

I got modestly rewarded for my $6.  Aside from several Mets and Orioles for my team collection, plus a variety of players I didn’t already have in my 2019 Frankenset, I got this insert card, one which is one of the few 2019 inserts on my want list… 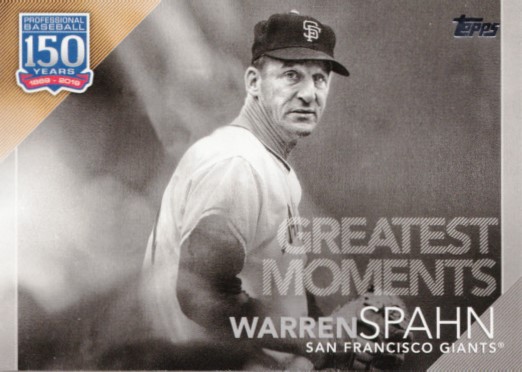 This is from the 150 Years – Greatest Moments insert set, and features Braves HOFer Warren Spahn with the San Francisco Giants.  After 20 years with the Boston and Milwaukee Braves, Spahn wrapped up his career with a season that the 44-year-old Spahn split between the Mets and Giants.  I’d seen cards which reflected his 20 games with the Mets, but had never seen so much as a photo of Spahn with the Giants… until this year.  This one is a keeper

In the other pack I got another insert which I’d been keeping an eye out for…  This Perennial All-Stars card of Brooks Robinson.

Although I’d be happy to keep this in my collection, I will also make a public offering of this card to CommishBob, if he needs it.  I’m way behind in my PWE’s to my small network of trading buddies, and this would certainly be a card I’d be happy to send your way, Bob.

6 thoughts on “CommishBob Sent Maulers To My House”