I was at this show a few weeks ago, and one dealer blew me away by having Canadian Football League cards from the 1960’s. Although I don’t follow the CFL, I’ve had a soft spot for the league since the NFL strike of 1982, when American TV networks showed CFL games to fill the time slots. With the 110-yard field and only 3 downs, the league sucked me in after a short time. I’m still kind of disappointed that the mid-1990’s CFL expansion into the US didn’t work out…. and by the way, the Baltimore Stallions got a raw deal.

We’ll start with this 1960 Topps CFL card of the Montreal Allouettes’ Ed Learn.  According to Wikipedia, Learn was a defensive back/punt returner who played 12 years in the CFL.

When I was going through the cards at the show, I picked out these cards based solely on visual appeal, since I didn’t know any of the players and have no real team loyalty.  This is a nice design, and the halftone action shot is like a precursor to 1968-69 Topps Hockey.  I love the old school helmet that Ed is wearing.

Here’s the back, with a drawing added by some long-forgotten artist. I’ve seen some interesting things added to cards with a ballpoint pen, but this is one of the more intriguing additions. 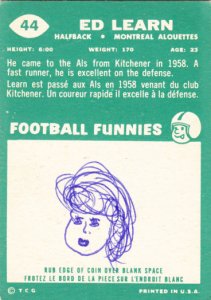 Next up, 1961 Topps CFL; I really like this look, it reminds me of the Beatles cards which would come a couple of years later. If you can’t read the script at the bottom, it says “Tobin Rote, Argonauts”.  Tobin Rote, cousin of Kyle Rote, was a quarterback for the Packers and Lions in the 1950’s, with the Toronto Argonauts for 3 seasons, and then would move to the AFL with the Chargers and Broncos. 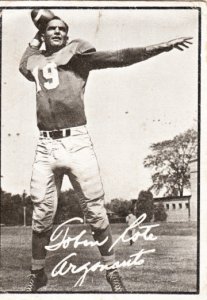 The card back is pretty basic and has one of those “rub a coin over the blank space” magic photo thingies.

Jumping ahead to 1963, here’s John Barrow of the Hamilton Tiger-Cats.  John Barrow was an offensive and defensive lineman, played in nine Grey Cup games (the CFL championship) and won four of those.  He’s in the CFL Hall Of Fame and in 2006 was named one of the 50 top CFL players of all time.

Man, I just love that staged running shot.  “We can rebuild him… make him better, faster, stronger…”

This card back has one of those things where you hold red cellophane over the image to get your answer to the question “Who is the new coach of the Tiger-Cats?”… the question on everybody’s lips.

Finally, here’s a card from 1964 Topps CFL.  Joe Poirier won three Grey Cups and was a regular all-star in his twelve seasons in the CFL.

My eye was drawn to that Ottawa Rough Riders logo, although it frankly looks more like it could be the logo for a brand a regional bakery.  I imagine that “OFC” stands for Ottawa Football Club, but I wasn’t able to verify.

Another secret message back, only I have no idea how this one works.

Since I’m sharing CFL cards, I may as well reflect back on some of the ones I’d featured here before.

First off, there’s the 1965 Topps CFL set; this was the first CFL card that swept me off my feet, I really like this design; it’s so colorful and 1960’s without being a riff on anything else from that time.

Last up is this 1963 Post Cereal CFL card, which I just wanted to get because it’s an oddball card from our neighbors to the North, and what’s not to like about that?

Canadian Football League cards are never going to be a major part of my collection, but at some point I would like to fill in some of the gaps in my type collection.