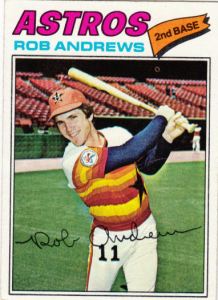 1970’s Highlights:
Andrews was the victim of Juan Marichal’s final career strikeout (Dodgers vs. Astros, 4/12/75); As minor leaguer, he was part of a trade which brought Lee May to Baltimore; hit safely in his first 5 Major League games

Fun Stuff:
Brother of Mike Andrews (who was featured in the previous 1970’s: A-Z post).

Card Stuff:
Shares a first and last name with CommishBob of The Five Tool Collector blog; Signed for the 1980 season with the Mets, but never played pro ball after his 1979 season with the Giants

Fun Stuff:
Came up in the Reds system and was traded to the Astros on 10/24/75 for two minor leaguers to be named later (one of whom, Luis Sanchez, would pitch for the Angels in the 1980’s)

Card Stuff:
The featured 1977 card is his rookie card.

Fun Stuff:
Inducted into the Hall Of Fame in 1984; 13-time All-Star, 9-time Gold Glove; 1956 AL ROY; Lead AL in stolen bases for 9 consecutive seasons; Played in World Series against the Dodgers with two different teams – 1959 with the White Sox and 1966 with the Orioles; His #11 was retired by the White Sox

Card Stuff:
Appeared on a 1974 Topps card, but was released by the Red Sox late in Spring Training;  While the Yankees had interest, Aparicio headed home to Venezuela instead;  The Yankee sliding in to 2nd in the featured 1972 Topps “In Action” card is Horace Clarke.

1970’s Highlights:
Has an infinite ERA in 1973 as he walked the only two batters he faced and one would later score; missed two seasons to arm injuries.

Fun Stuff:
Apodaca was a pitching coach with the Mets, Brewers and Rockies.

Card Stuff:
There are two versions of the “1974 Rookie Pitchers” card he appears on, with the more rare error version spelling his name “Apodaco”; I chose his 1975 card for this post because it is the only card of his which doesn’t feature a head shot.

1970’s Highlights:
Came within one strike of a no-hitter against the Phillies in 1972 and ended up with a 2-hit complete game; Got the win in Don Zimmer’s first Major League managerial victory; Twice lead the NL in losses (1971 & 1972), and in 1972 also lead in walks and wild pitches

College Stuff:
So much of Steve’s career highlights came in college that I went ahead and gave him a separate category… As a sophomore in 1965 he struck out 20 batters in a 15-inning CG College World Series shutout of Washington State; Was 1965 Collegiate Pitcher of the Year; In the the 1966 CWS, where he lead Ohio State to a National Title, he finished with 28 K’s in 20.2 IP while giving up 2 runs and 5 hits; Steve was the 1966 CWS Most Outstanding Player and would later be inducted into the College Baseball Hall-Of-Fame, the OSU Athletic HOF and the Omaha CWS HOF. His #22 was retired by Ohio State.

Steve turned pro after his junior year of college, signing with the Phillies.

Fun Stuff:
As anyone who’s looked at Steve Arlin’s cards knows, his grandfather Harold Arlin was the first to broadcast a baseball game; The Padres selected Steve Arlin from the Phillies in the 1968 Expansion Draft; Arlin graduated from dental school in 1970, did volunteer dentistry work while an active player and established a dental practice in San Diego after his baseball career was over.

Card Stuff:
I wouldn’t normally feature a “looking up so you can’t see the cap logo” card like this, but I think it’s the best photo of Arlin… plus he decided to retire before the 1975 season, so he was out of baseball by the time this card hit the stores.