At the last show I went to, which was about 6 weeks ago, I went in hoping to make progress on a bunch of projects I’ve got underway.  Of course, I made no progress at all because the dealers at this show had few of the cards I was looking for.

…But they did have some deals on other cards which made me think “Well, the next time I’m looking for a project, I could do a lot worse than this…”

For starters, I got this 1965 Topps Brooks Robinson card for a pretty good price.

I really like the 1965 Topps set.  I’ve already completed the Mets team set and it didn’t take much convincing to get me to commit to eventually chasing the Orioles team set.

HOWEVER… This project will not be what many collectors consider to be a complete team set, because the “1964 League Leaders” cards are heavily laden with HOFers. Card #1 in the set is the AL Batting Leaders card which features Tony Oliva, Brooks Robinson and Elston Howard. 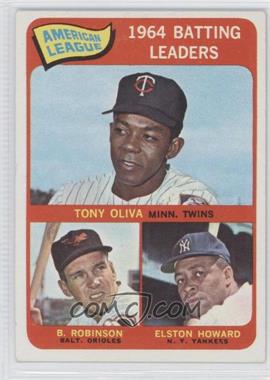 This card isn’t a problem… it’s affordable and I like all three players to varying degrees.

Then we get to card #3, AL Home Run Leaders, which has Harmon Killebrew, Boog Powell and *GULP* Mickey Mantle. 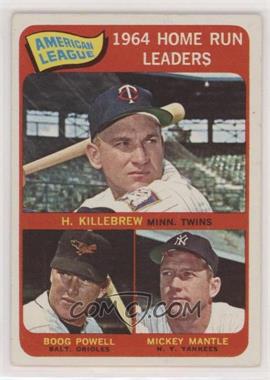 That square inch of The Mick is likely going to make this subset be out of my range. 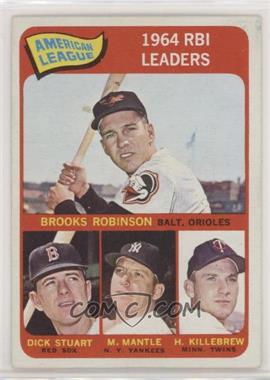 There’s another League Leader card featuring Wally Bunker plus four other non-HOFers, but you get the picture. Long and short of it is that unless I find league leader cards where someone drew a monacle on Mickey, I’m not going to sweat it.

Another dealer at the same show happened to have cheap 1964 Orioles, including this card where future 20 game winner Dave McNally is sporting a one-year cap style. The O’s without a bird on the cap? Say it ain’t so, Joe! Say it ain’t so!

It doesn’t hurt to also pick up HOFer Robin Roberts, who at this point had his 20-win seasons in the rear view mirror.

I also picked up this Jackie Brandt card and six other cards that I’ll spare you from.

I still would need to get Brooks, Boog and Luis Aparicio, but hey, it’s a start.

Back in the 1970’s, when I still liked the Yankees, I used to enjoy the Yanks’ broadcast team of Phil Rizzuto, Frank Messer and Bill White. Whenever I run across an affordable Bill White card, I’ll think “Bill White, I like Bill White” and throw it on my stack… I probably should just go ahead and officially declare him to be someone I collect… or will collect in 2021.

Same goes for Vic Power, except I’m not really quite sure why I like Vic Power… I just do.

Finally, I’m really leaning towards starting something of a Houston Colt .45’s collection… but only those cards which show the uniform. I’ve got enough capless Mets from 1962 Topps, I don’t need to be adding capless Colts to the picture.

Bob Lillis was an original Colt .45 who would move up in the organization and become the Astros manager in 1982.

This last card still freaks me out a little bit, because to my 1970s-centric mind Dave Giusti is a Pirate and should always be wearing a gold and black Pirates cap. (I would like to draw your attention to the crude “45” on the cap in the black and white insert picture)

I just learned two fun Dave Giusti facts while doing some quick research:
1) Before pitching for the Houston Colt 45’s in 1962, he pitched for the AAA Houston Buffs in 1961
2) Giusti was traded to the Cardinals in October, 1968 and three days later was taken by the Padres in the expansion draft. He appeared on a 1969 card as a Padre (in an Astros uniform with a blacked-out cap), but didn’t even get to Spring Training with the Padres… in December 1968 the Cards traded four players to San Diego to get Giusti back.