This time, we’re reviewing six players named “Brown” who had baseball cards in the 1970s (and some special bonus cards from other sports!)

Career highlights
A fan favorite in Detroit; Ranks 15th in career pinch-hits with 107; In 1051 career games, he played defense in just 430 of them (mostly in left field)

1970’s highlights
Used exclusively as a pinch-hitter in 1975 (47 appearances); Set an American League record for most career pinch hits in 1972; First DH in Tigers history

Fun Stuff:
During a game, Gates was about to eat some hot dogs in the dugout when the Tigers manager called on him to pinch hit… Gates, not wanting the manager to see him eating, hid the hot dogs inside his jersey. Naturally, he got a hit and ended up sliding head-first into 2nd and covering him with mustard and smooshed hot dogs.

Career Highlights
He was the last player from the Negro Leagues to have his contract purchased by a MLB club, having been acquired from the Kansas City Monarchs in 1961; The quintessential utility player, he appeared at six different positions in 1971 and 1972

Fun Stuff:
His older brother Paul pitched for the Phillies in the 1960s; Jackie was part of a trade package sent by the Rangers to the Indians for HOFer Gaylord Perry

Card Stuff:
After a December 10, 1976 trade to the Expos for Andre Thornton, Jackie was airbrushed into an Expos cap for a 1977 O-Pee-Chee variation

Bonus postcard – 1975 Cleveland Indians Team Issue (Update)
I would’ve used this as the featured card, but I suspect that if I used a postcard that some of you would’ve thrown a red flag on the field (to use a football metaphor)

1970’s Highlights:
Got into the 1973 ALCS with the Orioles as a 9th inning defensive replacement in Game 2

Career highlights
Not really a “highlight”, but a bad collision in the field in 1966 left him with a fractured skull, cheekbone and nose, which left him in Intensive Care for 3 days.

SIDEBAR: A FUN COLLECTING THEME FOR ANYONE LOOKING FOR SOMETHING TO COLLECT!!!!
…and it may just be me doing this…

During the 1970’s there was a Larry Brown who appeared in Topps or O-Pee-Chee sets for ALL FOUR MAJOR SPORTS.  Aside from “Baseball Larry Brown”, there were also these other Larry Browns:

Football Larry Brown #1 was a running back for the Redskins

Football Larry Brown #2 was a tight end/tackle for the Steelers (And a quick bit of trivia – when he switched from tight end to tackle for the 1977 season, he also had to, per NFL rules, change his uniform number.  That’s why an established veteran appears on this card as #87 but appears as #79 on later cards)

Hockey Larry Brown was a defenseman who played for the Kings, Rangers, Red Wings and Flyers (But didn’t appear in Topps Hockey sets, only O-Pee-Chee) 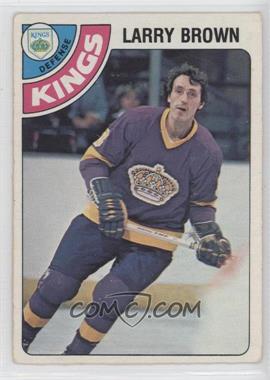 We now return you to your regularly scheduled 1970s A-Z blog post.

Career Highlights
“Downtown” Ollie Brown was the Padres 1st selection in the 1968 expansion draft, being selected from the Giants’ roster; Was well-known for his powerful throwing arm

Fun Stuff
He also pitched in the minors and threw a no-hitter in 1963; brother Willie was running back for the Rams and Eagles and brother Oscar played for the Braves

PHANTOM ANGEL ALERT!
Ollie was part of a 9-player deal that saw him going from the Brewers to the Angels after the 1973 season, but he was sold to the Astros late in 1974 Spring Training and then moved on to the Phillies later in the season.

Career Highlights:
Appeared in 160 games spread out over five seasons and never had a regular job

There are other players named Brown in the Majors in the 1970s, but these were the ones who appeared on baseball cards.

Of course, there was another baseball player named “Brown” who was very famous in the 1970s, even though he never played in the Majors…