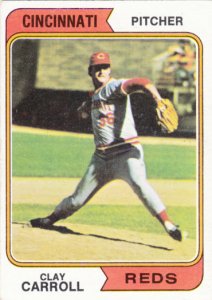 Career Highlights:
Inducted into the Cincinnati Reds Hall of Fame in 1980 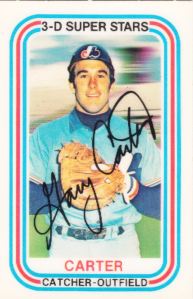 1970’s Highlights:
Was the catcher on the 1975 Topps All-Star Rookie team and The Sporting News named him the NL Rookie of the Year;  Got a first-place vote in the 1979 NL MVP voting, but finished well behind co-winners Keith Hernandez and Willie Stargell;

Career Highlights:
Inducted into the Baseball Hall of Fame, the Canadian Baseball HOF, the Expos HOF and the Mets HOF;  An 11-time All-Star, a 3-time Gold Glove, a 5-time Silver Slugger and a 2-time All-Star Game MVP;  Broke Al Lopez’ NL mark for games caught (2,056);  Lead the league with 106 RBI in 1984;  The Expos retired his #8, and although the Mets have not officially retired #8, nobody has worn it since 2001

Fun Stuff:
Was offered a football scholarship to UCLA before signing with the Expos;  Hit his first Major League homer off of Steve Carlton;  During his 1975 rookie season he played more games as a right fielder than as a catcher;  His brother Gordon played for Giants A-ball Fresno team in 1972 and 1973

1970’s Highlights:
Lead the league in batting in 1970 with a .366 average and also lead with a .454 On-Base Percentage;  Had a 31 game Hitting streak that same year, which stood as a Braves team record for 41 years, and was the starting Left Fielder in the 1970 All-Star Game;  Was the first DH in Rangers history

Card Stuff:
In November, 1976, the Blue Jays took Rico Carty from Cleveland with the 10th pick of the expansion draft.  Topps dutifully airbrushed Carty into a Blue Jays uniform…

…But on March 15, 1977, Carty was traded back to the Indians for Rick Cerone and John Lowenstein.  O-Pee-Chee was able to go back and use the original photo of Carty, sans airbrushing.  The best part about all of this is that the Indians traded Rico back to the Blue Jays in March, 1978. 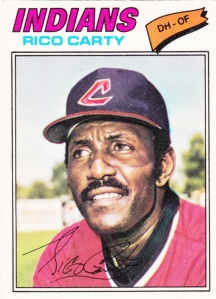 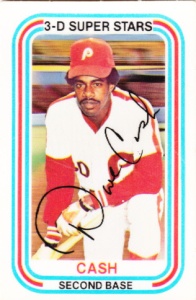 Fun Stuff:
Was the last Expos player to wear #30 before Tim Raines

Card Stuff:
Was released by the Padres at the end of 1981 spring training and didn’t play in the Majors again, so all three of his 1981 baseball cards have his full career stats.

Fun Stuff:
Started his career with the White Sox, played in the 1959 World Series and was traded to the Indians after the season… but at the beginning of the season, before he took the field for Cleveland, he was traded to Detroit, where he’d spend 15 years