I had an idea for a post on 1974 Topps baseball, but after a bit of research I found that the premise didn’t pan out — that rabbit hole went nowhere. Even though the original idea didn’t work out, I decided that what I did find was interesting enough to not let it fall on the floor.

So as you may know, 1974 was the first year that Topps issued the entire baseball card set all at once rather than in multiple series.  It’s also a year when they updated the set with a in-pack “Traded” set which reflected the flurry of transactions which took place during MLB’s Winter Meetings of December, 1973.

Now when it comes to updating the movement of players from the end of the 1973 season to the beginning of the 1974 season, you would think that it would fall into defined “phases” along these lines:

As it turns out, the lines are not as clearly drawn as one would think.

Before I go any further, I’ll mention that for this research I used the “1973 Transactions” page on Baseball Reference, which runs from the end of the 1972 season to the beginning of the 1974 season.  As I would find out, there are some transactions where the date was open to debate… but I’ll get into that at the appropriate time.

Now for this post I’m not going to address the whole Washington “Nat’l Lea.” situation, although the confusion surrounding that likely did cause some stress for Topps staffers at the time because on top of trying to prepare an entire set for release all at once, here was a team that had already announced they would be moving from San Diego to Washington DC… but then that got more uncertain as the Winter went along.

Among the earliest transactions which resulted in an airbrushing was the August 7th waiver claim of Joe Niekro by the Braves.  Although Joe pitched 20 games for the Braves in August and September, none of those games were in New York or the Bay Area, where many of the Topps photos of the day were taken. 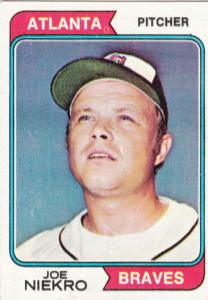 Before the waiver claim, Joe had pitched all of the 1973 season for AAA Toledo, so if this photo originally showed Niekro in a Tigers uniform (rather than a Toledo Mud Hens uniform), then this photo was probably, at the latest, taken in 1973 Spring Training, or maybe during an earlier season.

The latest transaction I could find that was reflected with an unaltered photograph was this Duke Sims card. 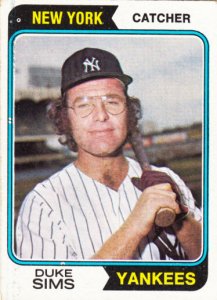 The Yankees claimed Sims on waivers from the Tigers on September 24, 1973, and the fact that a photo of him with the Yankees is available would likely only have happened for a player on a team playing in New York that last week of the season.

The Regular season ended on Sunday, September 30th, with the playoffs beginning on October 6 and the World Series wrapping up on October 21st.

There were a number of trades which took place in October of 1973, and those got updated in the traditional manner:

Capless  (The Cubs traded Jenkins to Texas for Bill Madlock and Vic Harris, 10/25/73)

Airbrushed  (The Pirates traded Cash to the Phillies for Ken Brett, 10/22/73)

“Guy watching airplanes fly overhead” (The Brewers traded Lahoud to the Angels in a 9-player deal, 10/18/73)

One transaction which was handled in a un-Topps-like manner was the November 7th trade of Jerry Morales for Glenn Beckert.  Rather than airbrush the players, the cards had the team border switched with a note on the back reflecting the trade. 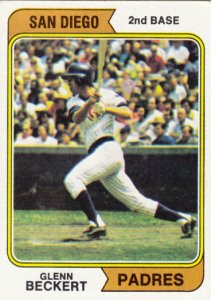 I recently found out that images of these two cards with the original team listings were featured in the packaging (wax box and factory set – yes, there was one that year) for 1974 Topps baseball, so that may have had something to do with not airbrushing or replacing these photos.

One other thing that I’d never really noticed before I started this post – Beckert’s card is ‘properly’ changed into a yellow and brown Padres border, but Morales’ card retained the yellow border of the Padres card, but has the pink ‘ribbons’ of the Cubs cards.

Interestingly enough, another trade made two days later *did* result in airbrushing.  The Reds traded Bobby Tolan to the Padres for Clay Kirby, and those photos were updated with airbrushing.

This November 9th trade was the last transaction to be reflected in the main set.

Part of the premise of the original post was that there seemed to be overlap between where the regular set gets its last update and when the 1974 Traded set picks up. There were two transactions listed on Baseball Reference as having taken place on November 3rd, but I believe that date to be incorrect. One of these deals sent Bob Locker to the A’s for Horacio Pina and the other deal saw Cecil Upshaw traded by the Astros to the Indians for Jerry Johnson. 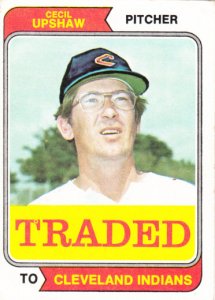 I was looking for some source for transactions other than Baseball Reference. I tried Googling for newspaper articles with little success, but then I remembered something… there are these things called “books”, and there are particular types of books called “encyclopedias”.  As it so happens, I happen to have an old encyclopedia related to this very subject.

This edition of the Baseball Encyclopedia has a section listing transactions, and it agrees with Topps that these two transactions happened on December 3rd, so I’m going to take that as gospel from here on out.

And so, with the final transaction of the base set happening on November 9th and with these two Traded set transactions officially moved back to December 3rd, the first player movement which shows up in the Traded set is the November 14 transaction where Larry Gura was sent by the Cubs to the Rangers as the Player To Be Named Later in an August transaction which sent Mike Paul from Texas to Chicago.

Interestingly enough, Larry Gura never pitched for the Rangers. He started the season in AAA and was traded to the Yankees for the previously-mentioned Duke Sims.  FWIW, Mike Paul pitched just two games for the Cubs in 1974 before being released.

The final transaction included in the Traded set was the December 11th deal which sent Cubs legend Ron Santo across town for Steve Stone, Ken Frailing (who shows up on a 4-player Rookie card with the White Sox) and Steve Swisher (whose rookie card would come in 1975 Topps).

I know that there’s not any huge point to this post, but I found it was pretty fun to put together and I learned a few things in the process. If you enjoyed this, let me know and I may do a similar post for another set… maybe 1975, 1976 or 1981.