This is the latest in a series on an ongoing project, a “Dead Parrot” Frankenset which features cards of NHL and WHA teams which are no more, which have ceased to be (as in the line from the Monty Python “Dead Parrot” sketch). The Frankenset consists of a binder containing 44 sheets and the goal is to have it filled with cards numbered from 1 to 396, with each slot filled with a card featuring a hockey team that has gone to meet its maker. 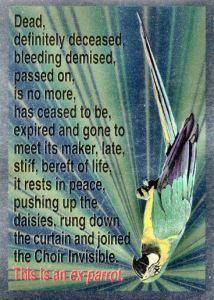 All of today’s challengers came to me in a package from Shane, the owner and proprietor of the Shoebox Legends blog. 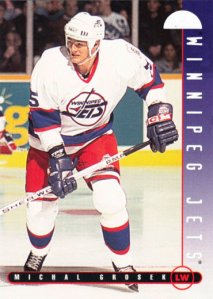 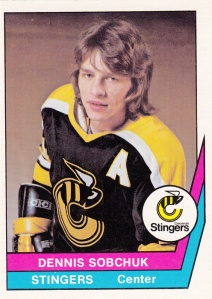 Anyone who’s been following this series knows that cards of the WHA’s Cincinnati Stingers are damn near untouchable. They were a team whose logos and uniforms I loved as a kid, and that love carries over into the present day. Apologies to the shiny Leaf set, but…

THE CHALLENGER IS DEFEATED!

In the last Dead Parrot post, I’d mentioned that there was a page in my binder that had just one spot to fill, and that I was going to cheat a little by looking through all my pending cards and seeing if I had a card #179 to complete that page.  Right now I’m going to feature that card… Representing 1992-93 O-Pee-Chee Hockey and the Hartford Whalers, it’s Michel Picard! 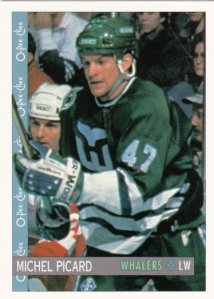 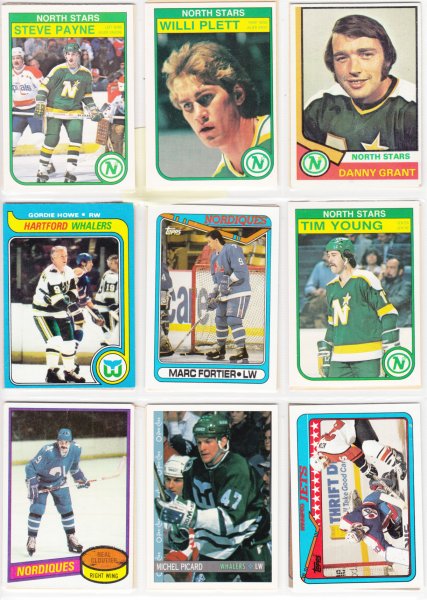 That’s a pretty nice looking page, even if it is a little heavy on 1982-83 O-Pee-Chee North Stars.  I would love to move that Steve Payne card in the upper left corner over to my “Photobombing Capitals” binder.

I’ve been meaning to write about that Gordie Howe card (middle row on the left) for a while, let me throw that in as a “bonus cards” while I’m thinking of it. 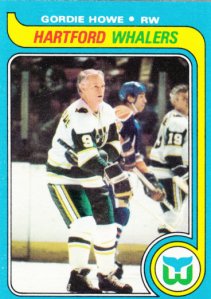 This card had been something of a “White Whaler” for me, partially because I waffled for the longest time about how hard to go after this set, given that I don’t have the very big dollar Gretzky rookie.  The photo makes the card… even though it’s in an NHL set and shows the Whalers and the Oilers, you can tell it’s a WHA action shot because of the gold trim and the New England Whalers logo on Gordie’s uniform.

Getting back to 1995-96 Leaf… competing for slot #97 and representing the Quebec Nordiques (even though the card says “Colorado Avalanche” after a franchise move to Denver), it’s Jocelyn Thibault! 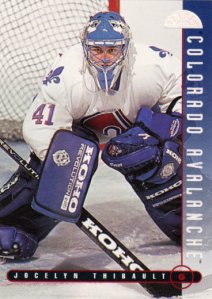 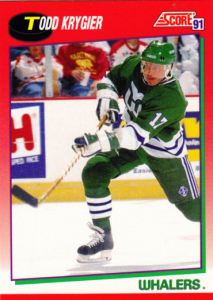 This card just entered the binder earlier this year after it dislodged a shiny Topps Finest Nordique… but in this case, the goalie shot works nicely in the binder page, because now the entire bottom row is filled with goalies (as you’ll see in a moment)…

And so…
THE CHALLENGER IS VICTORIOUS!

Page 11 is updated in the process, and you can see how this page is anchored by 3 goalies (well, the third one isn’t obvious from the photo, but Mike Liut was a goaltender, so just take my word for it).  I’ll be happer with this page once I’ve replaced that 1995 Fleer card in the upper left, but that’s a minor concern at this stage. 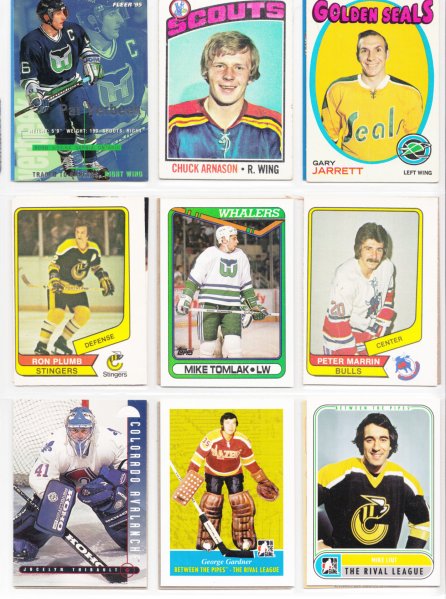 The next challenger, contending for slot #2 and representing 1994-95 O-Pee-Chee Premier and the Hartford Whalers, it’s Darren Turcotte! 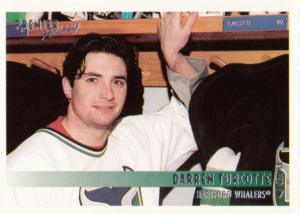 This card confused the heck out of me because it just says “Premier Hockey” on the front, but it’s not clear whether it’s O-Pee-Chee or Topps Premier. In either case, the copyright information lists Topps, but the tip off is that the back of this card is bilingual.

Slot #2, much to my surprise, had been empty. This card enters the binder even though it’s a fairly generic-looking card (even if it is “Premier”). I’m thinking that this card will lose some future battle, especially since there is no shortage of challengers with low numbers like 2.

But that’s a matter for another day.

Last challenger for today is #11, again from the 1995-96 Leaf set and features Andrei Nikolishin of the Hartford Whalers! 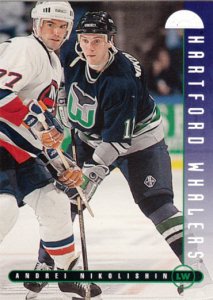 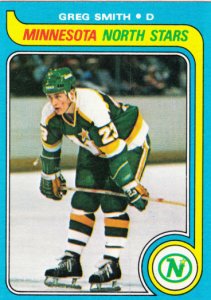 My kneejerk reaction was to stick with 1979-80 Topps, as well as the somewhat less represented North Stars (the binder has a lot of Whalers), and because of that…

THE CHALLENGER IS DEFEATED… for now, anyway…

The more I think about it, the less certain I am about this one. The photo on the Leaf card is a lot nicer than Greg Smith waiting for a faceoff. Anybody have any input on this one?

If I do make a change, I’ll try to remember to mention it in the next Dead Parrot post.

To wrap up… that’s two new additions to the binder, which means I’ve got 321 out of a possible 396 cards.  That puts this binder just over 81% full!

As mentioned earlier in the post, I completed one page which brings me to 14 completed pages out of 44 total pages.