This all came out of a thread on Twitter discussing keeping an eye out for Burger King cards within a stack of 1978 Topps.  i briefly shared the tale of the evil, evil Fred Stanley card from the 1979 Burger King Yankees set, and decided that I should write a blog post about it and go into more detail.

…Much more detail, as it turns out, than I’d intended.  In typical Shlabotnik fashion, I ended up dumping pretty much everything I know about these Burger King sets into this post.  If you just want to know about the Fred Stanley cards, I’ve clearly marked each section of the post.

For anyone who might find it helpful, I decided to give a quick overview on how to spot those Burger King cards which look very much like the corresponding Topps card… and since this was inspired by “What to look for in a stack of 1978 Topps”, I’ll also throw in ‘bonus coverage’ of another 1978 oddball set that also deserves mention.

I’m not going to talk much about the unnumbered checklist cards which are part of these Burger King sets. They generally have some form of artwork on the front, a checklist on the back, no actual photos, and would never be mistaken for a flagship Topps card.  Here’s an example from the 1979 Burger King Phillies set:

The back of this one looks very much like a Topps checklist, but the big tip-ff is the copyright line which doesn’t mention Topps. 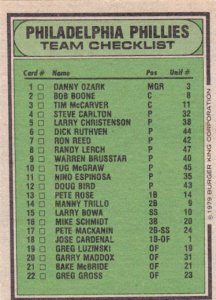 From here on out, these will get referred to as the “unnumbered checklist card” and won’t be mentioned otherwise.

For the sake of clarity – both in your reading and in my thought process – I’m going to run through these sets in chronological order.

1977 Burger King Yankees
The first Burger King set was a regional New York Yankees set which was originally meant to be 22 cards plus the unnumbered checklist, but at the insistence of someone in the Yankees organization (I’ve heard it was George Steinbrenner), Card #23 of Lou Piniella was added at the last minute. The Piniella card was issued later, short-printed and is not included on the checklist card.  This SP, along with the Reggie Jackson card which has an updated photo, are the two key cards in this set.

Most of the cards in these sets look the same as the corresponding Topps cards, but there are cases where they “update” the Topps set, since the BK sets were issued during the season.  Most of the examples I have are of the ‘update’ variety, because I generally don’t collect the BK cards which look like the original Topps cards.

Along with the Bucky Dent card shown above, another example has the 1977 Topps Jim Wynn card, which shows him with his 1976 team, the Atlanta Braves, and his 1977 Burger King card, which is updated to show his new team and his new position (DES. HITTER).

The backs are very similar:

To my knowledge, the only sure-fire way to tell 1977 Burger King from 1977 Topps is the card number.

If the card features a Yankee and has a card number of 23 or lower, then it’s best to compare the card to a checklist to see if that Graig Nettles card is a BK or a Topps.

Some other notes about this BK Yankees set…

For 1978 the Burger King promotion returned to New York and was expanded to Detroit, Houston and Dallas-Ft. Worth.  All three sets are 22 cards plus unnumbered checklists.  This was the only year that Burger King sets were issued for the Tigers, Astros and Rangers.

Here are some Topps vs. Burger King examples of the updated players… For all three it’s Topps on the left, Burger King on the right. 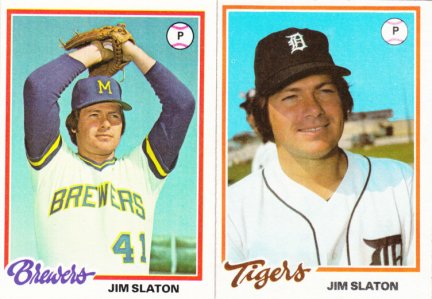 These BK sets, especially the Tigers, were notable for having some solo cards of rookies who were on the four-player rookie cards of the Topps set.

As with the 1977 set, the easiest way to tell the difference is from the card number (this is for Goose Gossage) 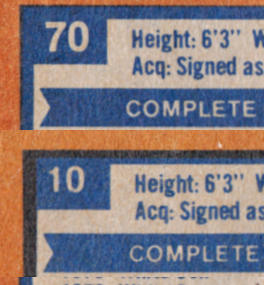 There’s also a very minor difference on the copyright line.  The Topps cards included a letter indicating which printing sheet the card was originally on (Sheet F in the example below), as well as an asterisk.  The BK card doesn’t have the sheet letter or the asterisk.

Looking closely at these BK card backs for the first time, I realized that the two different sets are printed differently as well.  As you can tell from the example above, the Topps card has dark orange and light orange printing on the grey cardboard, but the BK sets have dark orange and medium orange.

This arcane detail might not be of interest to a lot of collectors, but I know a couple of specific collectors who will find it interesting, so…

The Burger King cards appear to have a much more pronounced “trap” (ink printed on top of other ink) than the Topps cards, or maybe it’s just the darker orange used for the cards.  You can see it in the examples above, but you can also see it in the box borders on the right side of the card.  I cranked up the brightness and contrast on this example so you can see that the BK card (on the left) has an inconsistently dark box – especially on the top and much of the left side of the box –  where the Topps card on the right has a more uniform blue box.

That’s the last I’ll mention printing here, especially since I fall into the category of “knowing just enough to be dangerous”.

As for the checklists, here are the cards which have a significant difference between Topps and Burger King:

Yankees:  Rich Gossage, as you can see above, went from airbrushed to a non-airbrushed head shot.  Rawley Eastwick (#11) and Jim Spencer (#16) are updates.

Since this post was inspired by “cards to look for when going through a stack of 1978 Topps”, I’ll also mention the 5-card Zest set featuring Latin players and bilingual backs. Four of the cards had fronts which are identical to the corresponding 1978 Topps card.

The one card that is different is Willie Montañez , who was updated from the Braves to the Mets (and is the only card I have from this set)

These cards have different numbering, include Spanish text and have the MLB and MLBPA logos instead of the “PLAY BALL” game that was on the Topps and Burger King cards

It’s interesting that Montañez has a tilde on the back but not on the front. There were, of course, no tildes to be found anywhere in 1978 Topps.

For the record, here’s the original Topps front

Both of these sets are 22 cards plus an unnumbered checklist… but before I get into the sets, let me say more about….

I inadvertently discovered Fred Stanley’s “Evil Twin” when I was organizing my 1979 binder and could not find my 1979 BK Fred Stanley.  As it turned out, I couldn’t find the BK card because it was filed in with the 1979 Topps set.  This mistake came about because…

Both Fred Stanley cards are #16 in their sets!

Here are my 1979 Topps and Burger King cards of Fred Stanley… The difference in saturation is more a printing issue than a true difference.

As with many BK cards, the cropping is slightly different…  you can tell by comparing the fans around the edges of the photos.

The backs are damn near identical, but there are two significant differences I’m aware of, and perhaps there are others.

For starters, the font used for the card number is different… I would guess that this is because the Topps set is numbered to 726 (and needs a narrow font) while the BK set is numbered to 22.  That’s Topps on the left, BK on the right.

Like with the 1978 cards, there Topps cards have a Printing sheet identifier that the BK cards do not.

…OK, Lets’ get back to the sets themselves.

One interesting difference between the two sets is that the Yankees set includes new photos of new players in their Yankees uniforms, like Luis Tiant who had signed as a free agent during the offseason…

…But in the Phillies set, Pete Rose (who also signed as a free agent in the offseason) got airbrushed

One other difference that’s oddly interesting… The 1979 BK card of Ron Guidry uses the photo that Topps had used on Guidry’s Record Breaker card, rather than the action shot used on Guidry’s regular card. 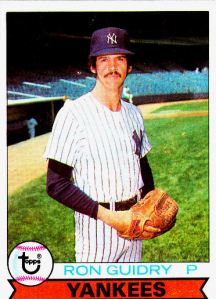 As for the breakdown of the checklists…

Like with the 1977 set, there is a Yankees team card (#1) which has team records on the back rather than a team checklist.

This is the Burger King set that collectors are most familiar with, and the one set where there are obvious differences on the front and back. This was nationally issued, was 33 cards plus a checklist, and while many of the cards use the same photos as Topps, not all of them do. 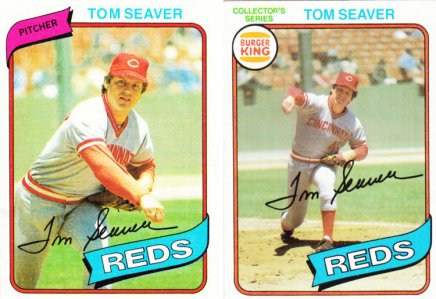 Here’s the back, which is pretty distinctive… Red ink instead of the blue on 1980 Topps, plus you have the Pitch Hit and Run graphic instead of the cartoon. 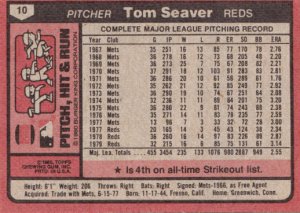 The cards which are different than 1980 Topps fall into two categories:

These cards look identical to Topps cards from the front. Lonnie Smith was in the BK Phillies set, but that was his only baseball card in 1980.

It’s pretty clear from the backs of the cards which one is a Burger King card… here are the top of the two backs (Obviously BK on top, Topps on the bottom).  For the BK set, the card number is move to the right to make room for the BK logo.

And the Sheet Lettering thing continues on to 1980… That’s BK on the left, Topps on the right.

There are five cards (not counting the checklist) which are unique to this set.  Dallas Green (#1) gets his own card instead of having a thumbnail on the team card, Kevin Saucier (#22) gets his own card instead of sharing one with two other “Future Stars”, and Keith Moreland (#3), John Vukovich (#8) and Lonnie Smith (#14) are in the BK set but don’t appear in 1980 Topps at all.

If anyone has any additional information to add, let me know and I’ll update the post.