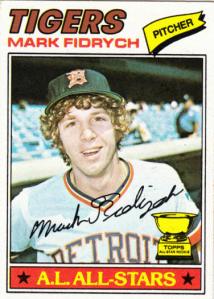 1970’s Highlights:
Everything about Mark Fidrych ends up talking about his incomparable 1976 rookie season. In 1976, his All-Star, ROY, Cy Young Runner-Up season he broke in by going 19-9 with a MLB-leading 2.34 ERA and a league-leading 24 complete games. Was also famous for his quirky behavior like talking to the ball and getting down and smoothing the mound with his hands; Named to the 1976 Topps All-Star Rookie team; Starter for AL in the 1976 All-Star Game, but gave up two runs in the first inning and took the loss; His arm “went dead” in a game against the O’s on July 4th 1977 and he was never the same after that

Fun Stuff… as if everything about “The Bird” isn’t fun stuff:
Was among the first athletes to make the cover of the Rolling Stone (“Gonna send five copies to my mother!”); Appeared in the 1985 movie “The Slugger’s Wife”

Card Stuff:
His 1977 O-Pee-Chee card is missing the All-Star banner and the Rookie Cup; If you consider everything of his from 1977 to be a “rookie card”, then he has a rookie card in 1977 Kellogg’s, Hostess and various MSA disk sets

1970’s Highlights:
Over the period from 1976-1978, Figueroa’s 55 wins was bested only by Jim Palmer, Steve Carlton, Dennis Leonard, and J.R. Richard;  Was the first Puerto Rican pitcher to win 20 games, doing so in 1978 when he went 20-9 and got some Cy Young consideration;  Finished 4th in the 1976 Cy Young voting (behind Jim Palmer and – you guessed it – Mark Fidrych) after winning 19 games;  Despite all this success over that three year period, he was never named an All-Star

Career Highlights:
Inducted into the Baseball Hall of Fame in 1992;  Was in the 2018 inaugural class of the Athletics’ Hall of Fame;  Also on the Brewers Wall of Honor; His #34 was retired by both the A’s and Brewers;  Won both the 1981 Cy Young and MVP awards while leading the league with 28 saves;  Was an All-Star seven times;  Set a record for career saves (which is currently held by Mariano Rivera)

Fun Stuff:
In 1976 he was sold to the Red Sox for $1M before Commissioner Bowie Kuhn nixed it and several other “fire sale” deals;  Fingers was, on paper, on the Cardinals roster for four days in December 1980… The Cards had also traded for Bruce Sutter and new GM Whitey Herzog made a deal after the Brewers called looking to make a trade;  has a .143 postseason batting average, but it says a lot that a reliever even has postseason at-bats 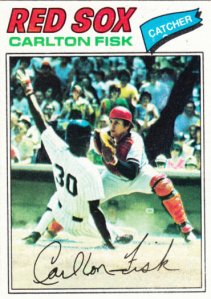 Career Highlights:
Inducted into the Baseball Hall of Fame in 2000;  Won three Silver Slugger awards;  His #27 was retired by the Red Sox and his #72 was retired by the White Sox;  Set records for games caught and home runs by a catcher, both records since broken;  hit a record 72 home runs after turning 40;  Was an 11-time All-Star

Fun Stuff:
Was originally drafted as an outfielder by the White Sox; Fitzmorris was taken in two expansion drafts — first taken by the Royals in 1968, and then by the Blue Jays in 1976 (although he was immediately flipped to Cleveland in a deal which brought Alan Ashby to Toronto)

Card Stuff:
Fitzmorris appeared on a 1979 card with the Angels after pitching for them in 1978, but he had signed with San Diego for 1979, didn’t make the team and never pitched in the Majors again